The advice, whether from Shakespeare or a modern self-help guru, is common: Be true to yourself. New research suggests that this drive for authenticity — living in accordance with our sense of self, emotions, and values — may be so fundamental that we actually feel immoral and impure when we violate our true sense of self. This sense of impurity, in turn, may lead us to engage in cleansing or charitable behaviors as a way of clearing our conscience.

“Our work shows that feeling inauthentic is not a fleeting or cursory phenomenon — it cuts to the very essence of what it means to be a moral person,” explains psychological scientist Maryam Kouchaki of the Kellogg School of Management at Northwestern University. 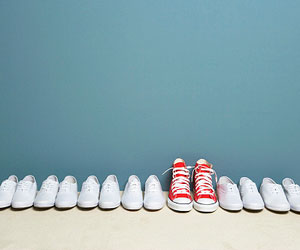 Kouchaki and colleagues Francesca Gino of Harvard Business School and Adam Galinsky of Columbia Business School, speculated that inauthenticity may have similar psychological consequences as immoral behaviors like lying or cheating since both types of behaviors are a violation of being true, whether to others or oneself.

That is, when we fake excitement for something we don’t want to do or try to fit in with a crowd that doesn’t share our values, we are lying about our true selves. As such, the researchers hypothesized that inauthenticity should also produce feelings of moral distress and impurity.

To ease our conscience, we may be tempted to wash these feelings of moral impurity away — almost literally.

The researchers found that participants who wrote about inauthenticity were more likely to fill in missing letters to spell out cleansing-related words — for example, completing w _ _ h as “wash” instead of “wish” — than those who wrote about authenticity. The inauthentic participants also reported a greater desire to use cleansing-related products (but not other products) and engage in cleansing behaviors (but not other behaviors) than the authentic participants.

Additional data indicate that performing good deeds may be another strategy by which we try to shore up our tainted moral character.

The researchers found that participants who were prompted to think about a time when they felt inauthentic were more likely to help the experimenter with an extra 15-minute survey than those who either thought about a time when they failed a test or what they had done the previous day. As the researchers hypothesized, participants’ helping behavior seemed to be driven by their feelings of impurity.

Interestingly, inauthentic participants showed less charitable behavior when they had the opportunity to test a hand sanitizer for a supposedly unrelated study. These results suggest that using the hand sanitizer successfully assuaged participants’ feelings of impurity, reducing the drive to compensate through charitable deeds.

While the psychological consequences of inauthenticity are likely to emerge in various social situations, they may be especially relevant to people who find themselves constantly “performing” in the workplace, the researchers say:

“In order to be responsive to various demands from customers, co-workers, and upper management, individuals may find themselves behaving in ways that are not consistent with their ‘true self.’ In the service industry, for example, service employees are asked to follow precise scripts and use recommended expressions regardless of their true cognitions and feelings,” Kouchaki notes.

“We are very much interested in better understanding both the psychological and behavioral consequences of authenticity and inauthenticity and are further examining the power of such experiences.”

All data and materials have been made publicly available via the Harvard Dataverse Network and can be accessed at https://osf.io/sd76g/. The complete Open Practices Disclosure for this article can be found at http://pss.sagepub.com/content/by/supplemental-data. This article has received badges for Open Data and Open Materials. More information about the Open Practices badges can be found at https://osf.io/tvyxz/wiki/view/ and http://pss.sagepub.com/content/25/1/3.full.