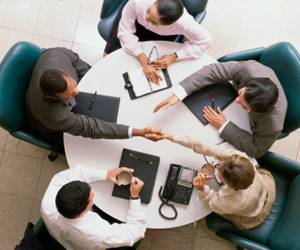 The most overbearing talkers in the office can be bad for business. Whether it’s in the conference room or by the water cooler, they display an incessant need to dominate every meeting and every conversation. And if they’re in positions of authority, they can douse any ideas from others.

But loquacious folks who aren’t in leadership roles don’t get away with controlling the dialogue, new research shows. Their colleagues simply don’t allow them to hijack a meeting or override anyone else’s input. And that leads to better sharing of information and ideas.

The research is based on experimental studies led by psychological scientist Leigh Plunkett Tost of the University of Michigan. The findings are published in the current issue of Academy of Management Journal.

Tost and her colleagues, Francesca Gino of Harvard University, and Richard Larrick of Duke University, recruited 400 college students and divided them into groups of three to six people. Each group was given hypothetical business issues and problem-solving tasks — all of them calling for information sharing. One task, for example, was designed so that the correct decision could only be reached if participants combined their knowledge, meaning group discussions were critical to success.

In an initial study, certain teams were placed in a condition where, before the task began, one member privately wrote about a time in their lives when they felt powerful. When individuals in this power condition were also given formal authority, other team members perceived them as dominating the discussion. And these factors led to poorer performance on the task.

A second study, however, found that the power-priming task had no impact on the discussion or task performance for teams that had no formal leaders.

Furthermore, the experimenters found that participants in the power condition displayed a more autocratic style of communication, aiming to impose discipline or control. But they only swayed the group’s climate of openness when they had a formal leadership role.

There are ways to tone down leaders’ conversational dominance. When told that everyone in the group has something unique to contribute to the task, and are advised on how to make the best use of those talents, team leaders are more open to input from others – and their teams perform better, another study showed. In essence, telling big talkers that listening to subordinates is in their best interest prompts them to keep the conversation open. And that leads to a better information flow and – ultimately – better decisions.

I liked particularly when told that everyone in the team had something specific/unique to contribute in order to achieve the best outcome to the activity. So, face this context, the “leaders” assumed more open to input from others..and of course better results in the end.

Anyway I think that on the business world the leaders have to consider genuinely that very single employee is able to contribute somehow for the success for the business, strategy….