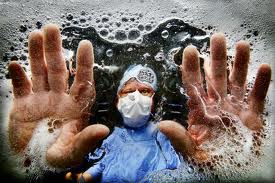 New Yorker essayist Atul Gawande is a surgeon at Brigham and Women’s Hospital in Boston, a prestigious teaching hospital affiliated with Harvard Medical School. A couple years ago, he wrote a profile of his hospital’s infection-control team, whose full-time job it is to control the spread of infectious disease in the hospital. The focus of the piece was hand washing—or more accurately, the team’s failed efforts to get doctors, nurses and others in patient care to adequately disinfect their hands.

They tried everything. They repositioned sinks, and had new, automated ones installed. They bought $5000 “precaution carts” to make washing, gloving and gowning easy and efficient. They posted admonishing signs, and issued hygiene “report cards.” They even gave away free movie tickets as an incentive for cleaning up. Nothing worked: Brigham and Women’s remains comparable to hospitals everywhere, which means that doctors and nurses wash their hands one-third to one-half as often as they should.

This is perplexing, and serious. Hospital administrators have known since the mid-19th century that hand washing is crucial to the control of bacterial infections. But even so, two million Americans acquire an infection every year while in the hospital, and 90,000 of those patients die as a result.

At least part of the problem is psychological. People in general—but health care professionals in particular—suffer from cognitive biases that skew their judgment about risk. Research has shown, for example, that hospital workers maintain an “illusion of invulnerability.” They tend to be overconfident about their own immunity to germs, ignoring evidence that is threatening to their personal health or sense of well-being. In addition, their memories are often biased: They easily recall times when they didn’t wash but nevertheless avoided sickness, and they forget the instances when they did fall ill.

If part of the dilemma is cognitive, why not try a cognitive intervention? That was the reasoning of psychological scientist Adam Grant of the Wharton School, University of Pennsylvania. He and colleague David Hofmann, of the University of North Carolina’s Kenan-Flagler Business School, decided to rethink the messages that doctors and nurses receive concerning hand washing and risk—to see if they could fashion a more persuasive one. If hospital workers feel invulnerable, they reasoned, why not take the focus off of them—and switch it to the patients. In other words, is it possible that health workers might be more motivated by messages that emphasize patients’ welfare rather than their own? Here’s how they tested that idea in two experiments.

Past research has shown that tiny changes in messages can lead to powerful changes in mind-set, and subsequently in behavior. To get an objective measure of workers’ behavior, Grant and Hofmann measured the soap and hand-sanitizing gel used from 66 dispensers for two weeks; this served as a baseline. Then they randomly assigned one of three signs to each dispenser. One read: “Hand hygiene prevents you from catching diseases.” Another read: “Hand hygiene prevents patients from catching diseases.” The third, a control sign, read: “Gel in, wash out.” Except for these subtle variations in wording, the signs were identical. The signs remained in place for two weeks, after which the scientists again measured the usage of soap and gel.

The results were encouraging. Doctors and nurses used significantly more soap and gel when the signs emphasized patient consequences, but not when the signs emphasized personal risk and benefit. This would suggest that although doctors and nurses may believe that they themselves are invulnerable, they don’t make the same assumption about their patients.

The researchers couldn’t be absolutely sure who was using which dispenser, or reading which sign, or if a few fanatic hand washers were skewing the findings. So they decided to run the experiment again, this time while directly observing the hand washing in two wings of the same hospital. The two wings were matched for type of patient, health conditions, and professional specialties, but one posted messages about personal consequences; the other, messages about patient consequences. Then teams of observers covertly watched and measured the amount of hand washing by doctors, nurses and other staff over a two-week period.

These findings have practical implications, the scientists note. Motivational signs cost nothing to make and install. It’s not clear from these preliminary findings how long the behavior change might last, but if it could be sustained for a year throughout a single hospital, that could prevent more than 100 cases of infection, at a cost savings of more than $300,000.

Motivational messages are not, in and of themselves, going to halt the rampant infections threatening hospital patients today. As Atul Gawande points out in his hand washing essay, on typical morning rounds, a resident will see 20 patients in an hour; nurses, the same. Proper hand washing is very time-consuming, but even doing minimalist sanitizing between patients would add up to a third of staff time being spent washing. That’s not going to happen. But against that reality, anything that boosts compliance even a little bit might save a few of those 90,000 lives now lost to infection each year.

Wray Herbert’s book, On Second Thought, Is now available in paperback. Excerpts from his two blogs—“Full Frontal Psychology” and “We’re Only Human”—appear regularly in The Huffington Post and in Scientific American Mind.