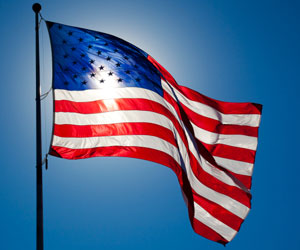 Exposure to the American flag led to a shift toward Republican beliefs, attitudes, and voting behavior, for both Republican and Democratic participants.

Believe it or not, basking in the glow of the grand old flag may shift our political beliefs. A study in an upcoming issue of Psychological Science found that exposure to the American flag led to a shift toward Republican beliefs, attitudes, and voting behavior, for both Republican and Democratic participants.

In the first experiment volunteers were asked to complete various surveys on their voting intentions and opinions on the Republican and Democratic parties and their leaders. Some volunteers were subtly exposed to an American flag while others were not. Results found that a single exposure to the American flag shifted volunteers’ voting intentions, behavior, attitudes, and beliefs toward the Republican end of the spectrum, and some of these effects even lasted 8 months after the initial exposure. To test whether the flag creates a shift specifically toward Republicanism rather than toward whichever party is currently in control, a second experiment was conducted in the spring of 2010 while the Democrats had the majority in both houses and control of the White House. They found that volunteers in the flag prime group still shifted their views towards the Republican side, even under a Democratic administration.

“Oh say does that Star – Spangled Banner yet wave?” It sure does — and apparently it creates a slight breeze that sways our attitudes towards the Republican side.

Through a series of experiments, psychological scientists have developed a better understanding of a confounding factor in social priming experiments.