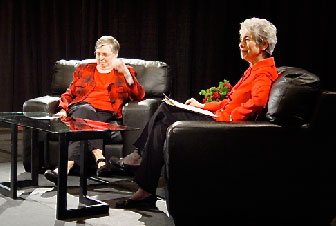 In a wide-ranging conversation, Linda Bartoshuk, renowned taste researcher now at the University of Florida, shared stories from her life and her rise to scientific prominence at the annual “Inside the Psychologist’s Studio” event at the APS 22nd Annual Convention. Interviewed by social psychologist and author Carol Tavris, Bartoshuk talked about some of her famous discoveries in taste research, including disproving the existence of the tongue map that so many of us learned about in school, discovering the mechanisms behind supertasters and burning mouth syndrome, illuminating the connection between ear infections and being overweight, and creating new magnitude scales to more accurately measure subjective experiences. She also discussed the importance of balancing work with family life and of facing sexism, which she experienced especially early in her career, with both humor and chutzpah.

When asked about how she first became involved in taste research, Bartoshuk said that she used to think it happened by chance. At the time she graduated from Carleton College, “women who weren’t engaged or going to teacher’s college, went to graduate school.” Since Bartoshuk was neither, she accepted advice from her psychology teacher to join a graduate program at Brown University. Her advisor there introduced her to taste research, launching her career. It was only upon later introspection that Bartoshuk realized that something deeper may have been going on. Her father had passed away from lung cancer when she was a junior in college. One of his most salient symptoms was a metallic taste problem, providing Bartoshuk with an early exposure to how powerful taste can be. Later in life, her brother also had cancer with taste symptoms. By that time, Bartoshuk’s career had given her the knowledge to understand, but not treat the problem, prompting further dedication to her research and today’s treatments for taste pathology.

Like most great discoveries, Bartoshuk’s are the result of brilliant research intersecting with the right circumstance. While at Yale, Bartoshuk had been working on both taste phantoms (experiencing a taste with no stimulus) and burning mouth syndrome (which at the time was thought to be a psychosomatic disorder) along with some colleagues from Canada. She had learned that phantoms are actually caused by nerve damage: properly functioning taste nerves, in particular the chorda tympani nerve that runs from the tongue through the middle ear to the brain, inhibit one another. If the inhibitory nerve is damaged, taste phantoms can result.  Bartoshuk had been testing the effects of anesthesia on these phantoms. Just about the same time, a Yale Medical colleague referred a man with burning mouth syndrome to Bartoshuk because no traditional treatments helped him. She used an anesthetic on the man and his pain doubled, causing Bartoshuk to realize that burning mouth is actually a central nervous system pain phantom.

Bartoshuk’s best known work —the discovery that some of us are what Bartoshuk has called supertasters—also came about in a circumstantial matter. Bartoshuk was actually using the bitter-tasting chemical phenylthiocarbamide (PTC) to revisit an old taste blindness phenomenon (which itself had only been discovered in 1931 when DuPont chemist Arthur Fox dropped a bottle in the lab, releasing a cloud of PTC dust which his lab mate could taste, but he couldn’t). She realized that not only did some people have stronger reactions to PTC, they had stronger reactions to all kinds of tastes. And the concept of supertasters was born. But, Bartoshuk did not have adequate scales to measure this new taste phenomenon. If two people rate a cookie as seven out of ten on sweetness, how do you know that they are both the same seven? One person’s seven could be another person’s five. So, Bartoshuk began her work on magnitude scales. She now uses sound, “which is absolutely beautiful” as a tool, to map various taste intensities.

With all her expertise in taste, it has been a natural progression for Bartoshuk to examine dietary choice. How does taste affect diet and weight? Are supertasters more likely to be obese? The answer is actually the opposite. Because supertasters taste everything more intensely, much food is too sweet, salty, sour, or bitter. So, supertasters are actually more likely to be skinny than regular tasters. But, the effect is very small. As Bartoshuk pointed out, weight is normally distributed, which means that many factors play a role. One genetic difference (which is all that being a supertaster is) is not enough to have a wide effect on weight across the population.

But Bartoshuk has identified one other piece of the weight puzzle: People with a history of ear infections are more likely to be overweight. She hypothesizes that, like taste phantoms and Burning Mouth, this could be due to nerve damage. Because the chorda tympani nerve passes through the middle ear, it can be damaged by ear infections or other upper respiratory problems.  As with burning mouth, this damage can result in the lack of the nerve’s inhibitory function, in this case causing the nerve not to inhibit tactile sensations, making fats all the more rich and creamy. A lifetime of enjoying fats more would change dietary choices and, in turn, weight.

This is just one possible explanation to one possible contributor to weight gain. Bartoshuk admits that, as of now, science doesn’t have the answer to obesity, “even though there are a lot of people trying to make a lot of money” on their own purported answer. Throughout her career, Bartoshuk has not been shy about taking on the sometimes too close connections between science and business. She got herself “officially added for the no-fund list” for MSG research by speaking out against the claim that MSG was a unique taste enhancer, when it is really just an inefficient source of sodium. Bartoshuk is quick to point out that none of her colleagues would knowingly conduct research skewed for monetary gain. But, companies will fund researchers already leaning toward results they want to see, leading to differentially funding research in certain areas.

Corporate influence in science is just one barrier that Bartoshuk encountered in her science.  She was also on the front lines of making inroads for women in science, and early in her career, she faced sexism from multiple sources. Sharing one of the most memorable encounters, Bartoshuk recalled that upon hearing that she was pregnant with her first child, a senior colleague responded to the news with, “We’ll be sorry to lose you.” When Bartoshuk told him that she intended to keep working, he retorted, “Women like you are going to destroy Western civilization.” Fortunately, Bartoshuk ignored his remarks and continued on with what would become her brilliant career.

Linda, It was good to read about you. Each time a come across something about you, I learn something new. Wish you could come west some time. I would love to see you.