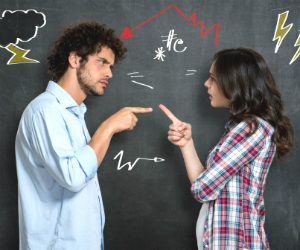 Having to work with rude or disrespectful colleagues can take a toll on an employees’ family life, according to new research.

An international team of psychological scientists led by Sandy Lim of the University of Singapore hypothesized that employees who deal with high levels of incivility at work are more likely to take out their negative mood on their spouses once they get home.

“Workplace incivility is a subtle form of interpersonal mistreatment,” Lim and colleagues explain. “Uncivil behaviors are typically rude or discourteous behaviors that violate workplace norms of respect, for example, insulting remarks, addressing others in unprofessional terms, and the use of a condescending tone.”

Previous research has shown that rudeness can be “contagious,” spreading from one individual to another throughout an office. The new study, published in the Journal of Management, suggests that a bad mood caused by an oafish colleague doesn’t simply go away when we get home; bad moods travel home with us, causing unhappy employees to lash out at their family members. Even low levels of rudeness from a coworker can have a significant negative effect on a person’s spouse and home life.

For the study, Lim and colleagues asked 50 full-time employees and their spouses to provide daily observations over the course of 10 working days. Employees completed both a morning and an afternoon survey questionnaire each day. The survey included measures of how much hostility they were feeling at that moment and whether they had experienced any incivility at work that day (i.e., whether a boss or colleague had put them down or acted condescendingly toward them). Each evening, the employee’s spouse recorded whether his or her partner exhibited angry or withdrawn behaviors, such as criticizing them or avoiding them.

“Supporting our predictions, our findings show that the experience of incivility was positively related to feelings of hostility, which was in turn associated with increased angry family behaviors, as rated by spouses,” the researchers explain. They also found “that hostility predicted not just angry behaviors but also withdrawn family behaviors. This is interesting as it suggests that participants might be withdrawing from social interactions at home as an attempt to refrain from venting their anger on the family and hurting them.”

A significant body of previous research supports the finding that stressful experiences at work can take a toll on our families. In a 2009 article published in Current Directions in Psychological Science, Rena Repetti and colleagues (University of California, Los Angeles) explain that people tend to react to work stress once they get home by expressing anger and irritability or by socially withdrawing.

In one study, researchers recorded working mothers as they picked up their young children from day care after work: “After describing their day at work, the mothers were reunited with their children. Analyses of the videotaped reunions showed that, if they had reported a more demanding workload or more negative interactions with coworkers and supervisors, the mothers spoke less and were less emotionally engaged…with their preschoolers, compared to their behavior on less stressful days.”

“The family is popularly imagined as a stable haven, a place where individuals come together to recuperate from the ups and downs of the outside world,” Repetti and colleagues note. “But the family has ups and downs of its own; it is a dynamic system, not impermeable to outside influences but porous and continually in flux.”