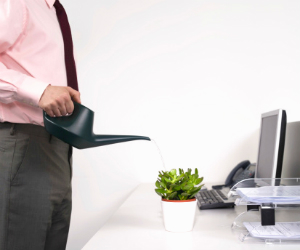 A widely held design philosophy in the businesses world stipulates that a “lean office” with clear desks and plain walls will help streamline business operations and maximize productivity. However, a new study from an international team of researchers has found that sprucing up the office with a little greenery may actually enhance employee engagement and could even boost performance at the office.

In a series of three experiments, psychological scientists Marlon Nieuwenhuis (Cardiff University), Craig Knight (University of Exeter), Tom Postmes (University of Groningen), and Alex Haslam (University of Queensland) found that workers who had plants in their offices not only reported higher workplace satisfaction, but also demonstrated higher productivity.

“The ‘lean’ philosophy has been influential across a wide range of organizational domains,” study co-author Alex Haslam explained in a statement. “Our research questions this widespread conviction that less is more. Sometimes less is just less.”

Nieuwenhuis and colleagues hypothesized that plants may have a positive impact on workers’ performance by improving their perceptions of the surrounding office environment. Because people know that plants can improve air quality, workers may feel that they’re breathing cleaner, fresher air and working in a healthier environment. An enhanced office space may also give employees the sense that their company’s management is attentive to and interested in their well-being.

Three weeks after installing leafy plants throughout one half of an office, the researchers found that employees working in the “green” half reported higher levels of concentration and productivity, and a sense that the air quality had improved.

A second experiment found evidence that the positive effects of office greenery may be long-lasting. Workers on one floor of a call center received enough plants so that each employee had at least one large, leafy plant in full view from their desks. Two weeks and 14 weeks after the plants were set in place, the 81 participants were given a short questionnaire asking them to rate their workforce satisfaction, ability to concentrate at work, sense of disengagement, and perception of air quality.

Compared to their “lean” office colleagues on another floor, those in the “green” condition reported higher levels of workplace satisfaction and lower levels of disengagement, as well as feeling like the air quality had improved. However, productivity measures used by the call center did not show a significant difference in productivity levels between the two groups.

In an experiment meant to objectively measure the impact of a “green” office on performance, the researchers assigned 33 participants to complete two tasks in either a plain workspace or one with a plant. Nieuwenhuis and colleagues found that those in the green office space completed tasks “faster and— importantly—without any accompanying rise in errors.”

“Data from the present findings indicate that a green working environment is consistently more enjoyable for employees, more conducive to concentration, and more productive for the business than its lean equivalent,” Nieuwenhuis and colleagues write in the Journal of Experimental Psychology: Applied. “Indeed, simply enriching a previously spartan space with plants served to increase productivity by 15%—a figure that aligns closely with findings in previously conducted laboratory studies.”