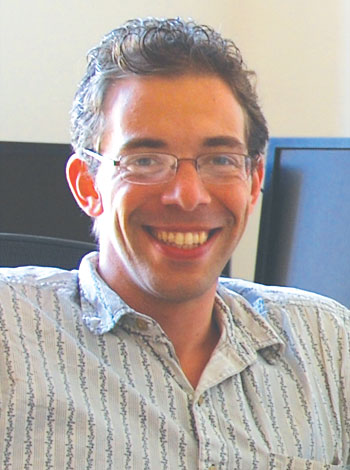 I am interested in the cognitive functions of language. Apart from being used to communicate our ideas, how does speaking a language shape those ideas in the first place? What sorts of concepts might be “unthinkable” if we didn’t have the capacity for language? How are traits such as memory, categorization, and visual perception — traits that we share with other animals, shaped by our capacity for language — a trait largely unique to our species?

My original interest comes from thinking about language evolution: Why are humans the only species to have a “natural” capacity for language, and what was the evolutionary history of this unique trait? My favorite conference is still Evolution of Language (EvoLang). The topic is highly interdisciplinary. The question on which I’ve focused most of my research — what do words do for us? — has taken me many places: from cognitive psychology to neuroscience, developmental psychology, anthropology, and linguistics.

I owe much of my way of thinking to connectionism. An early focus on neural network modeling helped me think of computational-level questions at an implementational level. In approaching an experiment, my thoughts always turn to the underlying mechanisms — how might this work in the brain? My advisor, Jay McClelland, was instrumental in developing this way of thinking. Mike Spivey and Sharon Thompson-Schill provided me with invaluable guidance and support. Although my research is focused on adult cognition, many of my questions are developmental in character, and I owe much to David Rakison and Dan Swingley, two developmental psychologists I’ve had the pleasure of working with. Other particularly important influences include Morten Christiansen, Jeff Elman, and Dedre Gentner.

Well, I am not sure how successful I am, but the small successes I’ve had I owe to being able to pursue my own research interests from the very beginning of my graduate training. This meant that I had no one to “blame” when experiments didn’t work out, but also meant that I got to take the credit for the successes. I also had to get used to defending my research — not only to an outside audience, but also to my own committee — which helped me gain confidence and to think carefully about how to best frame my research questions.

I am very thankful for the generosity of my postdoctoral mentors (Mike Spivey, Sharon Thompson-Schill, and Dan Swingley) who made it possible for me to pursue my research interests even when they did not explicitly align with their own research agendas.

Despite the mounting evidence for the brain being a system that is always in flux — a dynamic network constantly responding to endogenous and exogenous signals — psychological theories of cognition and perception still assume largely static and context-invariant representations. The overarching goal of my research agenda is to bring psychological theories in line with what we know about neural dynamics. In my research to date, I’ve focused on the role of language in cognition and perception. I’ve aimed to show that representations assumed by traditional theories to be static are in fact dynamically modulated by producing and comprehending language.

Any advice for even younger psychologists? What would you tell someone just now entering graduate school or getting their PhD?

It’s often said that you should find a research question you really care about. I agree. If it doesn’t keep you up at night, it should at least help wake you up in the morning. A more practical piece of advice I have is “learn to program.” Given the competitive job market, if you lack the skills to program your experiments and automate as much of the analysis as possible, you will be at a real disadvantage.

I’ve found it useful in grad school to work on multiple projects in parallel, since you never know which will end up working out. Don’t put off data collection until you’ve read everything on a given topic. On the other hand, do read the old stuff. Classic papers often contain insights and subtleties that are masked by second- and third-hand accounts.

Finally, ideas (at least for me) typically come when I am not actively working, so make time for other things.

In this paper, we conducted a large-scale statistical analysis showing that languages spoken by more people and over larger areas of the world are considerably simpler in certain aspects of their grammar than languages spoken by few people and in isolated regions. Although this paper does not represent my primary research interests, I feel that it contains a genuine discovery. I hope that the explanation we offered for the findings — The Linguistic Niche Hypothesis — will generate research in which language is treated for what it is: a system that is constrained by the needs and cognitive limitations of its learners and users.