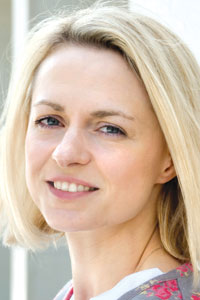 What causes people to have mental health problems across the lifespan. My research has so far focused on neurodevelopmental disorders, in particular, autism spectrum conditions. I am just starting a new project on the causes of psychotic experiences in adolescence. Both of these projects involve a longitudinal twin design to estimate the role of genetic and environmental influences on these conditions, as well as molecular genetic association designs.  I have just set up the Genes Environment Lifespan (GEL) lab at Birkbeck and am excited by the great team of researchers I will be working with.

Like a lot of people, I think the human brain is the most interesting thing in the world. But what makes me curious is what makes people different from one another. I am interested in finding the genetic and environmental influences that lead to one child developing autism and another not, or why one adolescent has psychotic experiences and another does not.

I was supported in my decision to continue in science beyond my undergraduate degree at Oxford by Professor Gordon Claridge, and since then, Professor Francesca Happé, Professor Robert Plomin, Professor Mark Johnson, and Professor Tony Charman have all been excellent mentors. I have been a member of the Behavior Genetics Association and the International Society for Autism Research since starting my PhD, and they have provided valuable support and a sense of scientific community. Their annual conferences are fun too!

A car crash. After graduating, I worked in the advertising industry selling snack food (which I didn’t enjoy) while intending to apply to do a PhD. I sat at home for two weeks with whiplash (there were no serious injuries, thankfully) and it gave me time to think about where to apply and what to do. After that it has been a case of being in the right place and having excellent collaborators and mentors.

My PhD supervisor Robert Plomin always said that good ideas are what make your career. The scientists I most admire have had far-reaching ideas about new ways to think about data, or new experimental designs. It’s easy to do the same old thing with slightly new tweaks, but it takes clear thinking and bravery to do something completely avant-garde. Fingers crossed!  In the near future, I hope to make some interesting findings in my new project on the causes of psychotic experiences in adolescence.

Well done for getting this far. Next step is to be stubborn and only study something you find fascinating that has not been done before. Your findings will make people stop and listen, and the working day will only ever go too fast, which is a privileged situation to be in.

I chose this genome-wide association study; it involved scanning the genome to find common genetic variants associated with risk for autistic traits. We took two novel routes: First, we studied different autistic symptoms separately because there was evidence that social and non-social autistic traits were caused by largely different sets of genetic influences. Second, we used a dimensional measure of autistic traits rather than a categorical affected-unaffected design because we hypothesised that some common genes influencing risk for autism spectrum disorders are also influencing milder manifestations of autistic symptoms in the general population.  It included three stages of replication and involved a lot of collaboration and bringing together of skills.