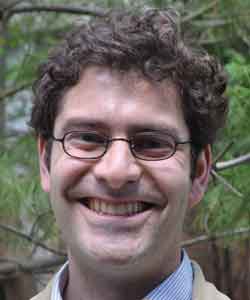 In my second line of research, the focus is on assessing individual cognitive, affective, and neural processing, which I term the “internal environment.” For example, we’ve found that individuals diagnosed with major depression have more “noisy” neural networks when attempting to remove irrelevant information from working-memory, which is related to depressive rumination. I’m also seeking to draw these two research lines together, and recently we’ve shown that interacting with nature can be therapeutic for individuals diagnosed with major depression. In both lines of research I employ multivariate statistics, computational modeling, neuroimaging, and behavioral experimentation.

I became interested in the field of psychology and the study of the human mind because of my grandparents’ lives and experiences. My grandparents on my father’s side of the family are Holocaust survivors and I grapple with how humans can do so much harm to other humans. I believe that there is no field of inquiry more important than the study of human behavior and the human mind. It is also amazing to me how my grandparents, who survived such horrific experiences, can continue to this day to be loving and open-minded people. You would never know what they went through on meeting them. It speaks to how resilient they are and, again, how incredibly complex and unique the human mind is. My maternal grandmother has also been an inspiration to me through her quiet morality, strength, and resilience in raising four children on her own after the much too early passing of my maternal grandfather. My grandparents and their experiences have inspired me to study the mind and it is my hope that, with a better understanding and quantification of the interactions between individual psychological processing and the environment, we will make huge strides in improving society and overall human well-being.

I’ve had so many mentors/scientific influences that have helped me along the way. I’ll start in chronological order.  Yili Liu at the University of Michigan sought me out, identified my scientific passions, and helped me to get on a research path and was my co-advisor throughout graduate school. Doug Noll, Luis Hernandez-Garcia, and Scott Peltier first introduced me to this incredible technology, fMRI, which allows one to see thought in action in the brain. As Doug once told me, it’s about as close to science fiction as you can get. Doug helped to get me in touch with John Jonides, who would become my co-advisor in graduate school. John taught me the nuts and bolts of what it takes to be a psychological scientist and his enthusiasm for science still inspires me to this day. I owe John so much.  Steve Kaplan got me interested in simple solutions to complex problems and, in particular, how interacting with nature could be beneficial to human psychological functioning. Steve taught me to see outside the box and to be true to myself — that I did not need to fit a particular mold. Ethan Kross helped to get me involved in many exciting and unique projects, and I’ll always value all of our conversations both about science and other subjects. Rick Lewis, Bernadine Cimprich, Patti Reuter-Lorenz, Ian Gotlib, Patty Deldin and Rich Gonzalez all have had a significant impact on my career. I could not have asked for a better post-doc advisor than Randy McIntosh. Randy has given me the freedom to work on problems that interest me and I’ve learned so many new computational tools from working in his lab. I’ve also learned a great deal from Stephen Strother and Tomas Paus. Tomas has taught me to think about psychological problems from a strong physiological perspective.  In addition, I’ve been drawn to his population neuroscience approach and he has encouraged me to pursue my environmental neuroscience approach.

I would like to see my two research lines merge closer together, which is beginning to occur. We’re now starting to examine the neural consequences of the interactions with different environments and how sustained exposure to more natural vs. more urban environments impacts psychological and physical health. We’ve also begun to quantify neural efficiency in novel ways and the relationship between neural efficiency and self-control, and I’m eager to see whether neural efficiency can be a biomarker for other behaviors. Lastly, I’m eager to incorporate genetics/epigenetics into my research as it dovetails nicely with my research goals.

This research has a lot of interesting elements. The sample that we studied was an incredible longitudinal sample from Walter Mischel’s original delay of gratification marshmallow studies. These participants were four years old when they were first studied, and have been tracked for more than 40 years. We scanned them while they performed a number of cognitive tasks and found that we could differentiate the high-delayers (children who delayed eating the marshmallow to receive increased rewards later) and low-delayers (children who did not delay eating the marshmallow) by how efficient their brain networks were when controlling the contents of working memory (high-delayers were more efficient than low-delayers). We could also accurately classify high- and low-delayers based on their brain networks when performing the task. This project was a large endeavor, with many years of work, and it was exciting to combine some novel multivariate neuroimaging analyses to a far-reaching behavioral phenomenon of interest to many people in differing areas of psychology.