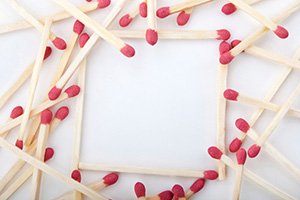 People encounter problems every day. Some problems, such as solving the daily Sudoku puzzle, are enjoyable, while others, like figuring out how to retrieve the keys you just locked in the car, are not. Although researchers have examined problem solving, there is still a lot we don’t know about how we strategically work through problems.

In matchstick problems, participants are presented with an array of joined squares. Each square in the array is comprised of separate pieces. Participants are asked to remove a certain number of pieces from the array while still maintaining a specific number of intact squares. Matchstick problems are considered to be fairly sophisticated, as there is generally more than one solution, several different tactics can be used to complete the task, and the types of tactics that are appropriate can change depending on the configuration of the array.

Louis Lee and Johnson-Laird began by examining what influences the tactics people use when they are first confronted with the matchstick problem. They found that initial problem-solving tactics were constrained by perceptual features of the array, with participants solving symmetrical problems and problems with salient solutions faster. Participants frequently used tactics that involved symmetry and salience even when other solutions that did not involve these features existed.

To examine how problem solving develops over time, the researchers had participants solve a series of matchstick problems while verbalizing their problem-solving thought process. The findings from this second experiment showed that people tend to go through two different stages when solving a series of problems.

People begin their problem-solving process in a generative manner during which they explore various tactics — some successful and some not. Then they use their experience to narrow down their choices of tactics, focusing on those that are the most successful. The point at which people begin to rely on this newfound tactical knowledge to create their strategic moves indicates a shift into a more evaluative stage of problem solving.

In the third and last experiment, participants completed a set of matchstick problems that could be solved using similar tactics and then solved several problems that required the use of novel tactics.  The researchers found that participants often had trouble leaving their set of successful tactics behind and shifting to new strategies.

From the three studies, the researchers concluded that when people tackle a problem, their initial moves may be constrained by perceptual components of the problem. As they try out different tactics, they hone in and settle on the ones that are most efficient; however, this deduced knowledge can in turn come to constrain players’ generation of moves — something that can make it difficult to switch to new tactics when required.

These findings help expand our understanding of the role of reasoning and deduction in problem solving and of the processes involved in the shift from less to more effective problem-solving strategies.

good work for other researcher