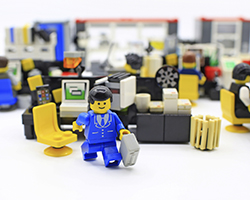 Animate objects, such as animals and humans, hold a special sway over humans’ attention. For example, when presented with two scenes (one containing an animal and one not), people will preferentially orient to the one containing the animal. People are also faster and more accurate at detecting change in animate objects compared with inanimate objects

The privileged attention of animate objects compared with inanimate objects makes sense from an evolutionary viewpoint, as it has historically been — and continues to be — important to quickly determine if one is seeing a friend or foe, a predator or prey. In a 2016 study, Mitchell R. P. LaPointe and his colleagues at McMaster University, Canada, investigated the bounds of attentional bias toward animate objects — specifically, whether this attentional bias would extend to objects that were themselves inanimate but that semantically represented animate objects.

The researchers used scenes constructed from LEGO® people and objects to test the limits of animacy attention bias. They chose LEGOs because they are inherently inanimate objects, but some pieces (i.e., LEGO people) represent animate objects, while others (standardized LEGO blocks, LEGO trees, etc.) do not.

Participants completed a change-detection task that was presented using a flicker paradigm, in which a black and white image of a LEGO-block scene with a background was quickly alternated with a second image containing only the background. Participants had to indicate whether they noticed a change to the LEGO people or a change to the LEGO objects in the scene. The researchers found that changes to LEGO people were detected more quickly than changes to LEGO nonpeople. This result was replicated in a second experiment, in which change detection for LEGO people was compared with change detection for LEGO blocks of the same size and color as the LEGO people.

The researchers wrote that this biased attention for LEGO people might be due to the fact that they are created with printed facial features (i.e., eyes and a mouth). Humans are noted face-perception experts, so the presence of the face on LEGO people could be driving the biased attention uncovered in these first two studies. To examine the influence of the printed face on the LEGO people, the researchers conducted a third experiment using similar methods as were used in the first two, but they occluded the facial features of the LEGO people. Even after this step was taken, people were still faster to detect changes in the LEGO people than in the LEGO objects, suggesting that the attentional effects were driven by something other than facial pattern.

In an effort to tease apart why changes in the LEGO people were preferentially attended to, the researchers conducted two final studies. In one study they blurred images of the LEGO scenes to obscure categorical information about the objects, and in the other they rotated images of the LEGO-block scenes 180 degrees. In both instances, participants continued to show faster change-detection for LEGO people than for LEGO objects.

Across the five experiments, participants consistently showed a change-detection benefit for LEGOs that, while inanimate, could be perceived as animate. The researchers hypothesized that participants’ “animate category” was generalized to include LEGO people. What features of the LEGO people spurred this generalization are still unknown, but they do not appear to be facial features.