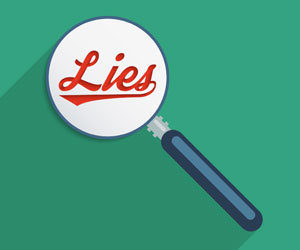 In research published in Psychological Science in 2014, psychological scientists Leanne ten Brinke and colleagues presented studies suggesting that people are able to detect lies on an unconscious level even if they can’t detect them consciously. But, in a new commentary published in Psychological Science, researchers Volker Franz and Ulrike von Luxburg examine the classification accuracy of the original data and find no evidence for accurate unconscious lie detection.

When participants were asked to indicate whether each suspect was lying or telling the truth, they were essentially at chance-level, indicating that they were not able to consciously detect deceit.

The researchers also employed widely-used behavioral reaction time tests (one of which is called the Implicit Association Test or IAT) to probe participants’ more automatic responses in relation to the suspects.

In their paper, ten Brinke and colleagues interpret these results as evidence that “viewing a liar automatically and unconsciously activates deception-related concepts, and viewing a truth teller activates truth concepts.” This pattern “supports our hypothesis that indirect measures of deception detection demonstrate greater accuracy than direct self-reports, which have dominated past research,” the researchers conclude.

However, Franz and von Luxburg argue that faster classification of words does not imply that the underlying lie-detection processes are accurate – that is, the reaction times are not necessarily useful for classifying individual suspects as guilty or innocent.

To demonstrate this, Franz and von Luxburg re-analyzed the original data, testing different reaction times as possible classification thresholds. If a reaction time is below the threshold (i.e., faster), it would signify that the suspect and the word matched – that is, a guilty suspect was presented before a deception-related word, or an innocent suspect was presented before a truth-related word. If a reaction time is above the threshold (i.e., slower), it would signify that a mismatch between prime and target occurred.

To explain these results, the researchers draw an analogy to a more intuitive example: classifying adults as male or female based on their weights. Because there is quite a bit of overlap in the distribution of weights between men and women, classification accuracy would be poor. But a comparison of the mean weights of the two groups would indicate that men weigh more than women.

“We have shown that – no matter how we aggregated the individual trials from ten Brinke et al. – the RT distributions of liars and truth tellers always overlapped so heavily that no good classification could be obtained,” they conclude.

When invited to submit a rebuttal to the commentary for review, ten Brinke and colleagues replied: “We appreciate the opportunity to respond to this Commentary but will respectfully decline. We hope that methodological and mathematical experts will take up this conversation to refine the methods available for comparing conscious and nonconscious classification in the future.”