Publications > Observer > Observations > Like Humans, Chimpanzees Know What They Know 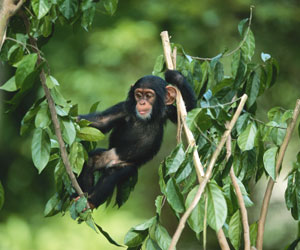 Metacognition — the ability to think about thinking — is a cognitive skill that we use every day in recognizing what we know, and what we don’t know. Though metacognition was once thought to be a skill unique to humans, a new study published in Psychological Science suggests that chimpanzees may share this ability.

Psychological scientist Michael Beran of Georgia State University and colleagues tested metacognition in three language-trained chimpanzees. All three chimpanzees had been trained from an early age to use symbols to request and label objects, actions, locations, and individuals. And they could respond to requests by humans using those symbols.

The data, gathered over many trials, indicated that chimpanzees tended to answer right away when they had seen the treat in the container. But if they hadn’t been shown the food item, they were much more likely to investigate rather than taking a guess on the keyboard.

According to the researchers, these findings suggest that chimps know what they know and what they don’t know. The study provides evidence that chimpanzees have metacognitive abilities that are closely related to those of humans.

Co-authors on this research include J. David Smith of the University of Buffalo and Bonnie Perdue of Georgia State University.

Publications > Observer > Observations > Like Humans, Chimpanzees Know What They Know