We deal with the world around us by putting it into categories. We are constantly trying to understand the things we encounter by classifying them: Is this a food I really like, one that I would eat only if I were starving, or something I won’t go near? Is this creepy-crawly thing an insect, a spider, or some other form of arthropod?

“Virtually every item can fall into a number of broader or more specific categories, and some levels may be more important to know than others,” write researchers Sharon Noh and colleagues in an article published in Psychological Science. 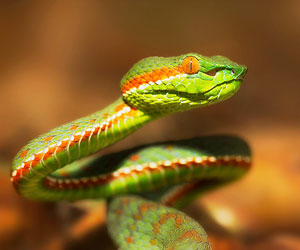 Noh and colleagues decided to design an experiment to better understand how we learn and form categories, especially categories of different levels and varying importance.

For example, if we focus on learning a specific category do we end up learning the broader-level category, as well? And does our learning of categories depend on whether those categories have intrinsic value (e.g., relevant to personal preference or useful for survival)?

To find out, the researchers chose snakes as their exemplar.

Participants were asked to focus on learning either the specific category or the broad category when they looked at the pictures.

As expected, the researchers found that participants were typically better at learning the level of category they had focused on than the one they had not focused on.

More surprisingly, intrinsically valuable information related to survival — whether the snake was venomous — seemed to impair participants’ ability to learn the snake’s genus when they were specifically told to focus on the genus. In other words, the presence of survival-related information hijacked their attention and hampered their learning of other information.

When participants were told to focus on learning the broader category, however, they were more likely to correctly learn the genus for snakes that were described as venomous or nonvenomous than they were for snakes described as tropical or non-tropical. That is, focusing on learning an intrinsically valuable category actually boosted incidental learning of the more specific category.