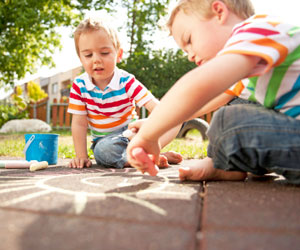 Social groups form along all sorts of lines — from nationality to age to shared interests, and everything in between. We come to identify with our groups, whichever those might be, to the point where we prefer people who belong to our groups and discriminate against those who don’t.

These group affiliations undoubtedly confer tangible and intangible benefits, but those benefits often come at a cost to members of other so-called out-groups.

Given the consequences for human societies, researchers David Buttelman and Robert Bohm of the University of Erfurt in Germany set out to investigate the early origins of intergroup discrimination.

“Investigating the developmental origins of in-group love and out-group hate is important not only from a theoretical point of view but also from a practical perspective,” the researchers note. “For instance, to develop effective programs that may reduce prejudice and discrimination in childhood, it is important to know the underlying cognitions and motivations that lead to these phenomena in the first place.”

Given the relative prominence of in-group interactions early in life, they hypothesized that in-group love would be stronger in intensity and would develop earlier than out-group hate.

The researchers randomly assigned 45 6-year-olds and 36 8-year-olds to the “green” group or the “yellow” group. The groups included a hand puppet wearing that particular color, and they convened in opposite corners of the room.

As expected, both 6 year-olds and 8 year-olds showed favoritism toward their own group, allocating the majority of the positive resources to the in-group puppet relative to the out-group puppet and the box.

The researchers believe the overall findings have “far-reaching” implications:

“The increase of cooperation and solidarity within groups clearly is of utmost importance for human societies,” they note. “Children, and in particular boys, should be taught as early as preschool age that intragroup cooperation and loyalty are valuable and beneficial for humanity, and even their own group in the long run, only if they do not imply out-group derogation at the same time.”