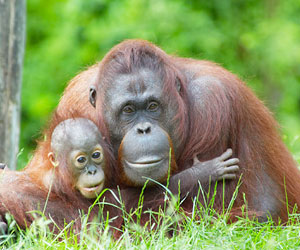 Within a year after birth, human infants develop the ability to direct their attention to the anticipated goal of another person’s movement, before it has occurred. So, for example, our eyes move to where we think an object will be based on how we perceive others’ objectives and intentions. The ability to anticipate actions helps us both to cooperate and compete with others.

In light of previous research suggesting that nonhuman primates may be able to predict others’ goals and actions, psychological scientists Fumihiro Kano and Josep Call of the Max Planck Institute for Evolutionary Anthropology in Leipzig, Germany investigated whether other primates make eye movements similar to those that humans make while observing another individual’s behavior.

The researchers analyzed data from 19 great apes, including chimpanzees, bonobos, and orangutans.

Every day for eight days, the apes watched a video in which either a plastic rod with a claw or a human arm repeatedly reached for and grabbed one of two objects, a frog or a duck.

Next, the researchers switched the objects’ locations, and the arm or claw reached between the two objects but didn’t actually grab either one.  The researchers used eye-tracking technology to answer a basic question: Would the apes anticipate the action and look toward the object that had been consistently grabbed, even though it had moved, or would they look to the spot where the object had originally been?

Kano and Call found that great apes would make proactive eye movements toward the target object after its location was switched, but only when viewing a human arm making the reach.

When they saw the claw stop midway between the frog and duck, the apes were no more likely to look at the target object than they were at the distractor object.

The researchers suggest that perhaps the grasping hand is more familiar to apes than the claw and is thus more readily understood as being goal-oriented.

Although there were variations in factors such as how long the apes looked at the objects, the overall pattern of results held across species.  Furthermore, the results were similar to those seen in human infants, leading the researchers to believe that the ability to predict goal-oriented actions is common to hominoids, which includes both apes and humans:

“We suggest that humans are not the only hominoids who are sensitive to other individuals’ goals and spontaneously predict their actions,” conclude Kano and Call.