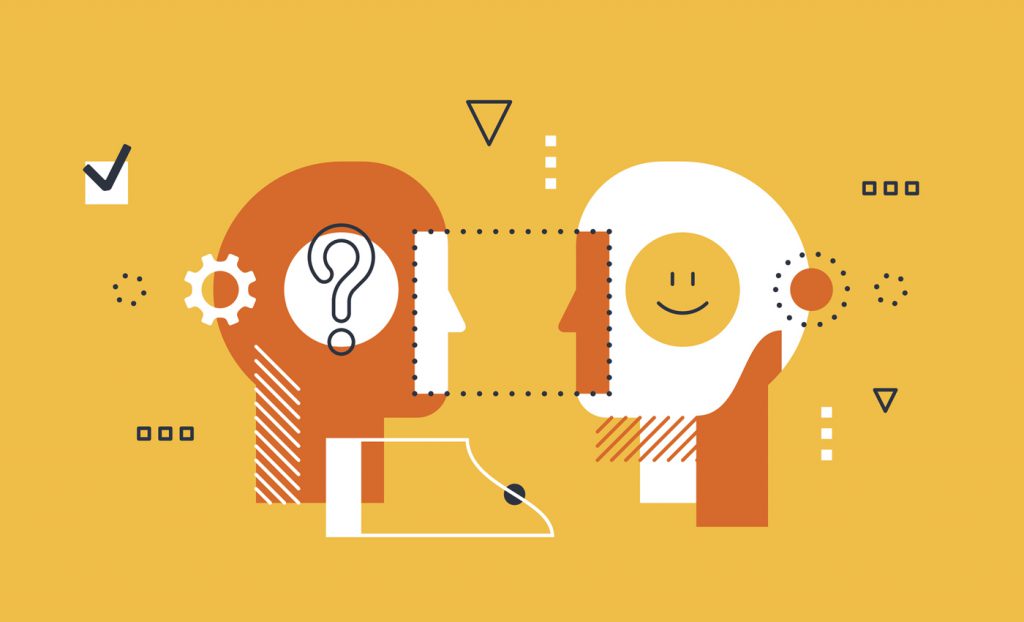 How do your expectations about an interaction affect the outcome? In any social situation, the beliefs you’ve developed over time can influence the way you behave towards and react to a conversation partner. Although you may consciously decide to ignore those beliefs, subtle social cues can inadvertently communicate your expectations.

In a lab setting, experimenter expectations are already known to influence experiment outcomes – that is, researchers who hope to find significant effects may be more likely to find them. Understanding how these expectations may affect participant behavior is especially critical when observing social constructs. For example, social priming, or influencing another person’s behavior through indirect cues, is a common construct in social psychology research. Studies have shown that activating a particular social concept, such as social status or age, can influence participants’ behavior on a subsequent, unrelated task.

But some studies, including double-blind experiments, have failed to replicate such priming effects. This could indicate that a confounding factor, and not a prime, actually led to the priming effects observed in previous research.

In a study published in Psychological Science, researchers Erin Heerey and Thandiwe Gilder hypothesized that experimenter expectation could be one such confounding factor:

“If experimenters were aware of both participants’ conditions and the research hypotheses, they may have inadvertently altered their behavior on the basis of this knowledge, thereby communicating expectations to participants.”

Heerey and Gilder conducted five experiments, activating participants’ awareness of social power to observe the effect of these primes and whether experimenter expectations mattered.

In the first experiment, a computer randomly assigned participants to receive a social power prime during a role-play task. In the high-power condition, participants were labeled the “boss,” and were told that they had an added responsibility during the subsequent task. In the low-power condition, the participants were called an “employee,” and were told that their boss has assigned them a particular responsibility (which was actually the same as for the high-power group). Following the priming task, participants completed an independent target detection task called a flanker task.

The authors failed to find evidence of a power-priming effect on behavior during the flanker task, despite previous research showing a relationship between the two.

Experiments 2 through 5 investigated how a priming task affected participants’ feelings of social power (high or low), while also manipulating experimenter knowledge about each participant’s condition.

Participants in each experiment completed a different task measuring constructs that have previously been related to a power-priming effect.

In one experiment, participants received a list of common behaviors and then a choice of two descriptions, one concrete and one abstract. They chose the description that they believed best categorized the behavior.

The results strongly supported that participants’ task performance was more likely due to experimenter expectation (i.e., the experimenter’s expectations based on the condition to which they thought they had assigned a participant), rather than the expected priming effect (i.e., an effect based on the high- or low-power condition actually assigned).

The other three experiments – a word categorization speed task, a risk taking task, and an approach behavior task – all yielded similar results, providing evidence for an effect of experimenter expectation on participant behavior.

Heerey and Gilder emphasize that these results do not imply that priming tasks fail during all double-blind experiments, and they do not invalidate past priming research. However, they suggest that readers ought to be “skeptical of research that does not explicitly describe strong double-blind experimenting or measure for the effect of experimenter belief on participant behavior,” if a double-blind design is not possible.

These findings have implications for best practices in experimental methods. Reducing the effects of experimenter expectation, such as by using a video to train participants, will allow for a more accurate understanding of priming and other social constructs.

The implications are clear: A researcher should design studies and analyse results with zero knowledge of the subject. It is likely marginally acceptable to form opinions after reading the resultant publication.