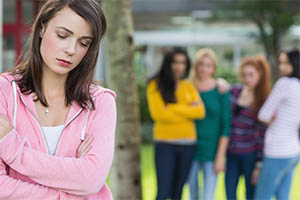 Whether it’s on the playground as a child or in the office as an adult, we may find it difficult to be excluded from a group. Humans have an innate desire to belong to a social community, and because of this, ostracism is hurtful. In a recent study published in the European Journal of Personality, researchers Erez Yaakobi (Ono Academic College, Israel) and APS Fellow Kipling D. Williams (Purdue University) examined potential factors that influence emotional responses to ostracism.

Attachment theory is one model that explains how people react to separation and stress in social situations. This theory suggests that past relationships with socially important persons such as relatives and caregivers (called attachment figures), especially in early formative years, influence how we respond in relationship situations throughout our lives. In adults, attachment orientation is often examined in terms of “anxiety” and “avoidance.” Anxiety refers to how likely a person thinks it is that a partner will be available and supportive in a time of need, whereas avoidance refers to the extent to which a person maintains social distance from others.

Although ostracism is unpleasant, it may not be similarly distressing for all people. In collectivist cultures, a high priority is placed on group welfare, inclusion, and adherence to social norms and behavior. For people in this type of culture, ostracism may be particularly distressing because of the intense pressure to fit in. Individualistic cultures, on the other hand, value personal goals, uniqueness, and independence. People from individualistic cultures may not be as distressed by ostracism because these cultures often value self-reliance.

To understand how attachment orientation and culture impact immediate and delayed responses to ostracism, the researchers assessed secular Jewish participants (e.g., individuals from an individualistic culture) and ultra-Orthodox Jewish participants (e.g., individuals from a collectivist culture) for attachment orientation (i.e., attachment anxiety and avoidance). The participants then played a computer-based Cyberball game, ostensibly with two other players who were throwing a ball. The two other players either included the participant in the ball-tossing (included condition) or excluded them by not tossing them the ball (ostracized condition).

After playing the game, participants reported their level of distress and then recalled an attachment event that was either compatible or incompatible with their own attachment orientation. In this exercise, participants either imagined someone who was close to them and consistently available, sensitive, highly reliable, and supportive (secure condition) or someone who was unreliable, insensitive, and not as supportive as they would like (insecure condition). Participants then reported their level of distress again, one half-hour after playing the Cyberball game.

These findings illustrate the ways that different attachment orientations influence how ostracism is experienced and highlight the importance of considering culture in such work. The authors suggest that future research examine these findings in a wider range of cultures and investigate whether the observed effects are sustained at delays of longer than half an hour.