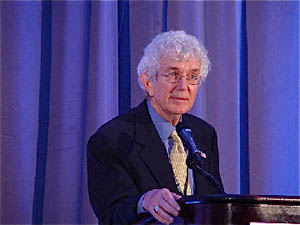 Douglas A. Bernstein speaking at the APS 23rd Annual Convention in Washington, DC.

Douglas A. Bernstein of the University of South Florida and has over 40 years of classroom experience. He thought he had seen it all, but he continues to be surprised till this day by some of his students’ antics and excuses in the classroom.

In his ‘Taxonomy of Teacher Complaints’ or TTC as he calls it, Bernstein states that a lack of motivation and respect, irresponsible learning behavior, dependency, academic dishonesty and an overdeveloped sense of entitlement in students are a teacher’s worst nightmare. Over the years, he has had students who never turned in any assignments or kept up with any of the reading but expected to receive at least a B grade just for showing up in class (although that meant texting, sleeping or chatting with classmates instead of actually paying attention).

Bernstein’s talk was the APS-David Myers Distinguished Lecture on the Science and Craft of Teaching Psychology given each year by a psychological scientist at the APS Convention. While Bernstein applauds these types of students as having “chutzpah”, he likens it to a scenario in which someone might kill their parents and plead for mercy on the grounds of being an orphan. Bernstein continues to be amazed at how some students can be quite bold and irresponsible at the same time and shows the audience several examples of how students exhibit these types of behavior – on the website, FunnyExamAnswers.com, in response to a college level physics exam question that asked the student to explain what hard water is, the student responded – ice. Whilst the audience broke out into laughter, Bernstein continued to discuss the dozens of other pet peeves that teachers have in the classroom.

Is it the teacher or parents who are to blame when a student simply does not care? Bernstein states that there are four types of parenting styles – authoritarian, permissive-neglectful, permissive-indulgent and authoritative – the latter being the best type of parenting style. Interestingly enough, teaching styles and practices corresponds with parenting styles and both greatly affect a student’s behavior. A teacher’s style interacts with the students individual characteristics and can bring out the best or worst in them, depending on how they have been brought up by their parents.

A teacher’s role is to encourage, support and motivate the student and bring out their very best -doesn’t the same ring true for parents?

As a teacher (and a parent), I think that there is a murky line where the blame game begins. I agree with what you are saying about students and their choices; there is nothing more frustrating than a bright child who adamantly refuses to choose to tow the line (do the work, participate, show up to class,etc) just because. We can reach out to parents, we can talk to students, we can stage academic interventions, but ultimately college bound seniors (that’s who I teach) need to be treated like the almost adults they are. I find that many of them think that once they get into college they’re entire personality is going to change and for some the maturity of being on their own does change it, but for others, the procrastination and dislike of learning in a formal setting doesn’t.

Parents and teachers alike have an obligation to challenge and inspire children/young adults to become what they are to be… at what point however, do we allow the students to make their own choices and learn to live with the consequences? I don’t know, I run in circles with this often. It’s hard to watch a student “fail” as it would be my own child, but sometimes failure is necessary to find success.