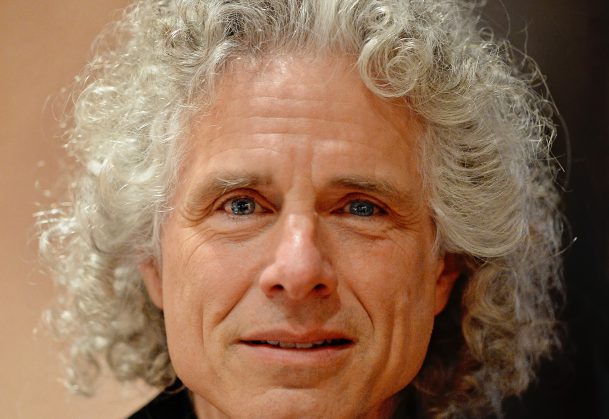 APS William James Fellow Steven A. Pinker got a major boost in sales for one of his many books this week thanks to an admiring tweet from Microsoft founder Bill Gates.

Gates said he is frequently asked for advice by new graduates, which inspired him to share his thoughts on “some things I wish I had known” back when he left college. And in those series of tweets, he said if he could give out any graduation present, it would be Pinker’s 2010 tome The Better Angels of Our Nature: Why Violence Has Declined, calling it out as “the most inspiring book I’ve ever read.” That shot the title to the top spot on Amazon, a boost of more than 600,000%.

In the book, Pinker – a psychological scientist at Harvard University – says that we are living in one of the most peaceful times in human history. To reach his conclusions, he estimated the frequency of violence and violent deaths relative to the human population from prehistory up to the present day. His estimates are supported by ethnographies, archeological research, law enforcement records, victimization surveys, and statistics recording casualties in armed conflicts. From these records, Pinker determined that up to 15% of prehistoric deaths were violent. In contrast, only 0.3% of human deaths in 2005 were violent.

“It doesn’t mean you ignore the serious problems we face,” Gates said in his series of tweets. “It just means you believe they can be solved. This is the core of my worldview. It sustains me in tough times and is the reason I love my work. I think it can do same for you.”

Hailed as one of the world’s most influential people by Time magazine, Pinker has written on vast stretches of the human mind, including language, emotion, vision, and reasoning.

See a video of Pinker discussing Better Angels of Our Nature.

And see author Sally Satel’s interview with Pinker for an installment of the APS video series Inside the Psychologist’s Studio.

NATO Grants for the Science of Peace and Security

The North Atlantic Treaty Organization Science for Peace and Security Programme provides funding for multi-year research and development projects related to security and NATO’s strategic objectives. Applications must be submitted jointly by a scientist residing and working in a NATO country and at least one co-director in a Partner country. More

Edited by C. Nathan DeWall and David G. Myers  Aimed at integrating cutting-edge psychological science into the classroom, Teaching Current Directions in Psychological Science offers advice and how-to guidance about teaching a particular area of research or topic in psychological science that has been the focus of an article in More

Inge Missmahl brings peace to the minds of Afghanistan

In this wrenching, compelling lecture, psychologist and humanitarian Inge Missmahl opens up about her groundbreaking, sadly overlooked projects in Afghanistan. The war-ravaged nation is home to over 30 million individuals, yet only 24 mental health professionals practice there. Her efforts to increase the numbers bring hope and healing to a More