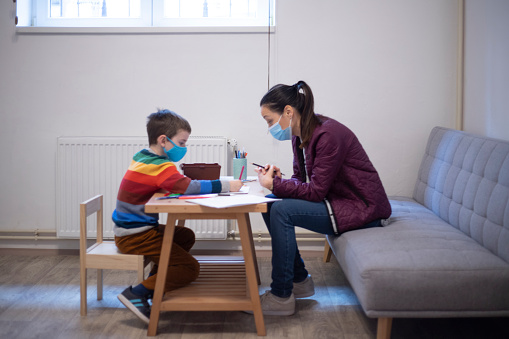 Autism spectrum disorder (ASD) refers to a range of varying conditions that affect individuals’ abilities to communicate and interact with others. Common characteristics of ASD include challenges with speech and nonverbal communication, and repetitive behaviors and interests. According to a 2017 study reported by the U.S. Centers for Disease Control and Prevention, nearly 5.5 million adults in the United States are diagnosed with a subtype of ASD, but each person who is diagnosed experiences it in unique ways—and has their own strengths and challenges in how they learn, think and problem-solve.

Read more about Autism Spectrum Disorder in the APS archive.

In this study, individuals with and without ASD viewed photographs of women’s and men’s sad and happy faces while an eye tracker measured changes in their pupil sizes and fixation durations. Both groups of individuals showed similar changes in pupil size. Interestingly, participants with ASD fixated on the area around the eyes in the photographs for less time than participants without ASD, and longer fixation times corresponded with less pupillary contagion. Thus, even though they spent less time looking at the eyes, participants with ASD still showed pupillary contagion. Taken together, these results support the overarousal hypothesis of ASD, which suggests that individuals with ASD reduce eye fixation as a way to decrease arousal from processing social and affective stimuli.

Link Between Facial Identity and Expression Abilities Suggestive of Origins of Face Impairments in Autism: Support for the Social-Motivation Hypothesis

Whyte and Scherf investigated whether sex differences might emerge in eye-gaze processing, thought to be a core deficit in ASD. The authors recruited a nonclinical sample of adult men and women who exhibited either high or low levels of autistic-like traits (ALTs) and showed them a series of images depicting a person among multiple objects. After viewing each image, participants indicated what the person was looking at by choosing one of four options (a target object, a plausible nontarget object, or one of two implausible nontarget objects). Men who had high levels of ALTs showed poorer eye-gaze following than men with low ALTs and women with high ALTs. Women’s performance on the eye-gaze task did not vary according to ALTs. The authors suggest that abnormal eye-gaze processing may be part of the broader male autism phenotype but not the female autism phenotype.

People with ASD appear to show atypical visual prediction of motion trajectories, this research suggests. Children and adolescents with and without ASD performed a computerized task in which they saw a bird whose movement had been occluded and predicted when it arrived at a target location. Participants without ASD developed a central-tendency bias throughout the experiment—an adaptive behavior indicating accumulation of knowledge about the stimulus statistics—whereas participants with ASD did not show this bias. Smooth-pursuit eye movements for the moving bird were also associated with better performance in participants without ASD and with a bias for responding early among participants with ASD.

Van de Cruys and colleagues presented participants with Mooney images—simplified black-and-white representations of source images that can be perceived differently before and after exposure to the natural source images—and asked participants to guess what each image showed. After participants saw the source images, they tried to identify each Mooney image again. Participants also completed the Autism-Spectrum Quotient (AQ) questionnaire, a measure of autism-like traits. Regardless of their scores on the AQ questionnaire, all participants showed improvements in recognition accuracy for the Mooney images after exposure to the source images. When the researchers compared adolescents with and without ASD, they found no differences in performance improvements. These findings suggest that the fast formation and application of specific priors, and therefore the ability to apply top-down processing, is preserved in ASD.

Libsack and colleagues’ study suggests that ASD symptom severity and impairments in theory of mind (ToM; ability to make inferences about others’ state of mind) might be associated with distinct brain activity. Participants with and without ASD viewed vignettes and made mental-state inferences about the characters’ behavior while the researchers used electroencephalography to measure their brain activity. Participants with more accurate ToM and less severe ASD symptoms tended to show a late positive complex (LPC) event-related potential. The LPC, thought to indicate cognitive metarepresentation, may help to explain the heterogeneity in ToM performance in individuals with ASD.

Prior research using visual paradigms has shown that children with ASD exhibit reduced visual aftereffects compared with typically developing children. The authors extended this work, investigating whether the emotional salience of auditory stimuli would affect sensory adaptation in children with and without ASD. Participants listened to a series of stimuli designed to induce auditory aftereffects, categorizing each recording according to its emotional content or phoneme (a single, irreducible sound in speech). Although children with ASD were worse at categorizing emotional expressions than they were at categorizing basic phonemes, auditory aftereffect sizes were similar for children with and without ASD. These findings suggest that individuals with ASD do not show general impairments in sensory-adaptation mechanisms.

What Do New Findings About Social Interaction in Autistic Adults Mean for Neurodevelopmental Research?

New findings suggest that social and communication difficulties among autistic adults can be influenced by mismatches in communication styles that also reflect nonautistic difficulties. Thus, deficit-based accounts of autistic social difficulties may be overly simplistic, because they do not account for the bidirectional nature of interactions between individuals with and without autism. Shifting from a deficit-based view to a difference-based view of autistic social difficulties could increase public understanding of autism, bridge the gap between different interaction styles, and provide opportunities for the inclusion of autistic individuals.

It Takes All Kinds (of Information) to Learn a Language: Investigating the Language Comprehension of Typical Children and Children With Autism

The Longitudinal Study of Early Language (LSEL) has been following the speech, understanding, and interactions of typically developing children and children with ASD. Naigles summarizes the findings of the LSEL: Both groups of children show similar syntactic understanding and word-learning strategies, including within-group variability associated with other aspects of individual behavior. In both groups, early linguistic knowledge and social abilities influence later speech and understanding. These findings suggest that language development might have both social and linguistic foundations.