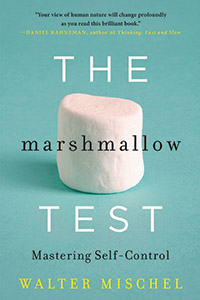 As a child, I honestly do not know if I would have eaten one marshmallow or waited for two during Walter Mischel’s famous delay-of-gratification test, affectionately known as the “marshmallow test.”

What I do know, however, is that I love pie — pecan pie, coconut cream pie, blueberry pie, lemon chess pie, sweet potato pie, or good-old-American apple pie. Left to my own devices, I have been known to eat a whole pie, tiny sliver by tiny sliver, in one afternoon. As I read [APS Past President] Walter Mischel’s latest book, The Marshmallow Test: Mastering Self Control, before heading south for the holidays, I found myself craving pie.

Pie is a very big deal in the South and was a large part of family tradition growing up in North Carolina. Maybe my yearning for pie was associated with the fond memories of childhood, or maybe it was simply because I love the sweet, flaky butteriness of pie. Regardless, as I turned each page of Mischel’s book, I found myself consumed with thoughts of how I would prevent myself from succumbing to the temptation of pie and gaining the 2 pounds the average American gains over the holidays.

Do not be misled by my own preoccupation with pie. This book is about so much more than how to gain self-control over delicious and fattening foods. It is the story about how a finding from a simple laboratory experiment that Mischel developed has led him on a fascinating journey of rich scientific discoveries on well-being. Mischel shares with us entertaining observations of how even 4-year-olds can reap the two treats promised by an experimenter if only they can bring themselves to wait rather than devouring the treat in front of them. Some turn away or sit on their hands; others create an imaginary friend for distraction; still others try to take naps in their efforts to double their rewards. Yet others stare down the marshmallow until they succumb to its fluffy, sweet essence or devour it almost immediately upon its presentation.

The brilliance of this laboratory test, as one reads further, is how this simple task of self-control in childhood can be a powerful predictor of later well-being, with longer delays being associated with higher SAT scores, lower body mass index, lower divorce rates, and more.

Throughout the book, Mischel references the work of so many of my favorite psychologists, including Michael Posner, Mary Rothbart, Daniel Kahneman, and many collaborators and friends. Ensuring that his book reaches readers of many ages and literary tastes, he highlights important points about the stability and inconsistency of self-control, quoting Descartes, Freud, Cookie Monster, and even Bruce Springsteen. My favorite quote is Oscar Wilde’s: “I can resist everything except temptation,” which led me to immediately think of the yumminess of pie.

Mischel emphasizes the importance of reframing temptations — of having choices and consequences for our actions in strengthening self-control. Another approach presented is the use of  “if–then” strategies that set into place incompatible actions and thoughts to help us resist the habitual ones we tend to fall back upon when faced with temptation or emotional situations.

I tried to practice and internalize the different strategies described for mastering self-control in preparation for the onslaught of the many sugary temptations of the holidays. But it is one thing to refrain from dessert at a restaurant or in our own homes, where we may be able to impose more control — like by not ordering or cooking a dessert. It is quite a different situation when there is a table full of not one but five pies and we are among our siblings. I have found that when adults are among their brothers, sisters, or parents for a few days, they quickly revert to their childhood ways. The notion of how characteristics of our personality, like self-control, may appear stable but actually vary by situation is discussed by Mischel in terms of the consistency paradox. Even highly successful individuals can have lapses in their self-control in certain situations. If the motivation changes, then so too does the behavior. Mischel illustrates this idea using the lapses of Bill Clinton and Tiger Woods as cases in point.

One of the more poignant questions asked in the book, and the question upon which it ends, highlights the importance, when deciding between immediate versus delayed gratification, of recognizing that the choice is ours. Merely knowing we have a choice can empower us. And so when looking at the buffet table of desserts including five tempting pies with perfectly flaky, buttery crusts and thinking about eating a piece of each, I paused and asked myself, “Would I like to?”

BJ Casey is an APS Fellow and the Sackler Professor and Director of the Sackler Institute at Weill Medical College of Cornell University. In her research, she uses neuroimaging methodologies to examine behavioral and brain development, specifically as it relates to attention and affect regulation. She can be contacted at bjc2002@med.cornell.edu.