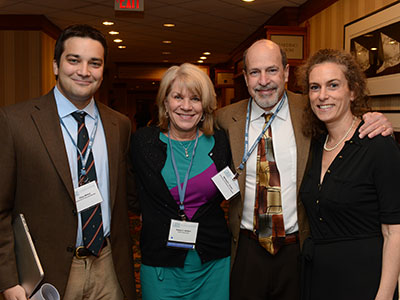 Elaine F. Walker’s influence can be measured in her stellar publishing records, her many awards, and the number of her former students who have gone on to acclaimed research careers of their own. At the 25th APS Annual Convention, Walker received the 2013 APS James McKeen Cattell Fellow Award. In a symposium at the Convention, three of her students discussed their research interests and how they were inspired by Walker, the Samuel Candler Dobbs Professor of Psychology and Neuroscience at Emory University.

Walker’s work on visual processing in psychopathology inspired Michael Green, professor-in-residence in the Department of Psychiatry and Biobehavioral Sciences  at the University of California, Los Angeles, to delve deeper into the visual perceptual deficits associated with schizophrenia. He uses a paradigm called backward masking, where a visual stimulus (the “target”) is presented very briefly followed by a second stimulus (the “mask”), which can make the target more difficult to identify. After noticing that subjects who tended to have more impairment in masking also performed poorly on social perception tests, Green hypothesized a cascade model in which a person with schizophrenia experiences difficulties with visual processing in the moment when a stimulus is first presented, a glitch that ultimately impairs his or her ability to pick up on social cues. This social cognition deficit has in turn been linked to poor functional outcomes in daily life and relationships. Green continues to refine and test this model and uses it to inform recovery-oriented interventions for schizophrenia.

“If you start with the first tenth or two-tenths of a second, you can sometimes wind up in places you didn’t expect,” Green said, referencing both his own unpredictable research path as well as the critical effect of this time period on schizophrenic patients’ lives.

Deborah Walder, associate professor of psychology at Brooklyn College, was influenced by her mentor’s research on the role that sex hormones play in vulnerability to psychosis. Extending Walker’s studies on the effect of sexual and neuromatural factors on levels of cortisol, a stress hormone found at higher levels in schizophrenic and psychotic patients, Walder has been examining sex-specific factors that may account for some of the differences between men and women in the prevalence, severity, and course of schizophrenia and other psychotic disorders. Her early results indicate a possible buffering role of gonadal hormones like progesterone, which fluctuates over the course of the menstrual cycle. These results, while preliminary, could ultimately influence how treatments are designed and disseminated.

Some of Walker’s most prolific studies came in the 1990s, when she began studying childhood home movies from adult schizophrenic patients and observed many of them showing specific motor deficits. These videos became the first direct evidence that predisposed vulnerabilities to schizophrenia are present from birth. Vijay Mittal, assistant professor of psychology and neuroscience at the University of Colorado at Boulder, has continued this line of research, looking for similar observable motor abnormalities in the period that immediately precedes the onset of the disorder, usually in adolescence. Because only 15 percent to 35 percent of those who evince symptoms in this so-called prodromal period will eventually develop a psychotic disorder, fine-tuning the distinguishing factors that can reliably separate those who ultimately “convert” to schizophrenia versus those who do not is key. In his research, Mittal has found that hyperkinesia, or abnormally increased muscle activity, in the face and upper body was most predictive of conversion. He is now examining the brains of prodromal subjects to try to determine a reliable biomarker for conversion.

The divergent research interests of each of Walker’s former mentees illustrate the tremendous scope and impact of her work, not to mention the enthusiasm she has inspired in her students.

“I have a deep passion for the work that I do, and that was certainly influenced by the passion that Elaine has for her work,” Walder said.