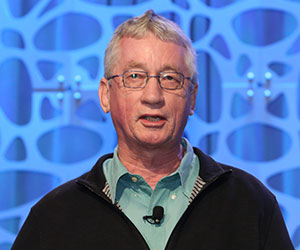 The biologist and primatologist Frans B.M. de Waal likes to show a video from the 1930s of two chimpanzees moving a heavy box. They pull in tandem. They break in sync. They’re the ape equivalent of officemates. One of the chimps gets fed, and with his motivation removed, he’s suddenly much less interested in the job. But every time he tries to sneak away, his (still-hungry) partner taps him on the shoulder and gives him a look, as if to say, “Hey, buddy, back to work here!”

The clip still gets a laugh some 80 years after its creation, at least judging from the crowd at de Waal’s Bring the Family address at the 2015 APS Annual Convention. But the scene is more than a hoot. It’s an early data point for a scientific appreciation that’s gained consensus only in the past few decades, thanks largely to de Waal’s research: that nonhuman primates display a lot of the social behaviors once thought unique to people.

“I’m going to talk here about how humans are animals,” said de Waal, who’s in the psychology department at Emory University and also is director of the Living Links Center at the Yerkes National Primate Research Center. “Which maybe 25 years ago was a controversial statement, but it’s not anymore.”

De Waal described similarities in the way humans and primates arrange political hierarchies in his 1982 book, Chimpanzee Politics: Power and Sex Among Apes. Much of this insight emerged through watching the animals interact over the course of thousands of hours at the Royal Burgers’ Zoo in de Waal’s native Netherlands.

One trait of a political structure, said de Waal, is the existence of what he calls “reciprocity.” By this he means that any leader, from a human president to an alpha male ape, needs powerful friends both to form a coalition and to gain the respect of the populace. Over the years, de Waal has seen many signs of this behavior in primate leaders, from walking in step with older, respected members of a group (“alpha emeriti” primates) to letting weaker females eat food that might easily be taken from them (chivalry may be dead, but it’s still good politics).

De Waal and collaborators tracked reciprocity among primates during thousands of interactions related to grooming and food sharing. They found that if Ape A grooms Ape B in the morning, then Ape B will share more food with Ape A than with anyone else in the afternoon — a sign of both memory and gratitude for the earlier act. De Waal said that reciprocity is more or less present in everything chimps do.

“Even the lowest ranking female in the group is able to hold onto her food because she’s part of the reciprocity system,” he said.

Some early evidence that primates could establish cultural norms — which de Waal defined as social learning and conformity — emerged back in 1952 when Japanese researcher Kinji Imanishi observed the practice of potato washing spread throughout a group of macaque monkeys. Still, said de Waal, for a while many people claimed only humans were capable of imitating others and that therefore only humans were capable of having culture.

“Which is sort of odd,” he said, “because we have a verb aping.”

De Waal and collaborators have been challenging that assumption since 2003 with the Chimpanzee Cultural Learning Project. For one study, they created a puzzle apparatus called a panpipe, which can be solved in two ways to release food: by lifting a lever or by poking it in the right spot. The researchers taught a high-ranking female in each of two separate chimp groups to use one panpipe strategy or the other.

“The reason we use high-ranking females as models is that the males are too busy,” de Waal explained. “Male chimpanzees are always involved in politics and sex. If you bring them into the room, they’re very uncomfortable because their friends are out there, and who knows what they’re doing. They don’t have time for these kinds of experiments.”

After the training period, the researchers waited to see how other chimps in a given group went about the task. Every ape in the group with the “poking” expert was soon poking the instrument, whereas nearly every ape in the “lifting” group used that technique. A couple of apes in the lifting group actually figured out how to poke on their own — but they still preferred to lift because that’s what everyone else in their group did. The experiment produced evidence of “a conformity bias that is regarded as a hallmark of human culture,” the researchers wrote in a 2005 paper in Nature.

“We call this ‘conformism’ in the sense that they know there was another technique that was equally efficient and that they have used to get the food, but they actually prefer the technique that everyone else is following,” said de Waal.

De Waal is not totally ready to claim that primates are moral beings, but they certainly seem to understand fairness. To test this concept, de Waal and collaborator Sarah Brosnan (Georgia State University) developed a system in which two monkeys in adjacent study cages can receive a piece of food by delivering a stone to a researcher. The food can either be a grape, which monkeys love, or a cucumber, which the monkeys tolerate but clearly see as the lesser reward.

Chimps placed in these situations go one step further, said de Waal. In these cases, sometimes the chimp getting the grape will refuse until both sides are fairly compensated for their effort.

De Waal closed his talk with a pair of videos to further illustrate the point. The first, a viral hit on YouTube, shows a monkey throw a fit after getting a cucumber instead of a grape — chucking the vegetable back at the researcher in disgust. The second, sent to de Waal by a mother, shows a young girl wailing after receiving only half a cookie, since her brother had just received a whole one — tossing the treat to the ground in similar discontent.