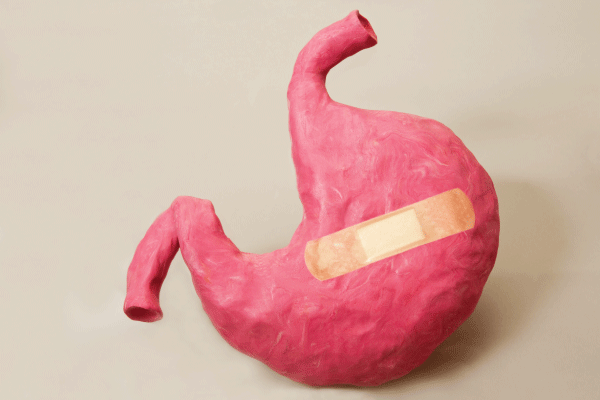 Serotonin has gained a widespread reputation as the neurotransmitter responsible for controlling happiness, well-being, and mood. Although serotonin’s actual functioning involves much more complex processes, most people would answer “in the brain” if asked to identify where 90% of the serotonin in their body resides. Surprisingly, this is not the case. Researchers estimate that more than 90% of the serotonin in the human body is produced in the digestive tract, where it influences and affects a variety of our bodily processes (Fung et al., 2019).

While awareness of this little known fact can be helpful to most individuals looking to boost their well-being, there is one population that might particularly benefit from further delineating the gut-brain connection: the exhausted, overworked graduate student population. Research studies and university surveys have consistently found that graduate students have higher rates of depression and anxiety, as well as poorer nutrition and sleep hygiene, than the general population. Additionally, the uncertainty and stress caused by COVID-19 brings its own set of additional difficulties. Living though a global pandemic is a universally difficult experience, but the challenges it brings graduate students in terms of pauses in data collection, research funding, clinical work, and isolation from peers puts this population in a uniquely challenging situation. By understanding the importance of gut health, psychological scientists can gain further insight into the burgeoning field of gut-brain axis research, in addition to learning more effective ways to manage their health and well-being during times of stress.

The gut microbiota is often referred to as the “second brain,” and the role it plays in influencing brain functioning and behavior is a current hot topic in scientific research. Investigators know that the gut and brain are continually communicating, and although they haven’t fully clarified this process, they have identified numerous indirect pathways. The one thing we do know for sure is that the gastrointestinal system is responsible for much more than just breaking down that pepperoni pizza with extra cheese from lunch.

Known in the scientific community as the enteric nervous system, our second brain consists of more than 100 million neurons located in the walls of our intestines’ alimentary canal (which, in total, stretches to measure over nine meters). In his 1998 book The Second Brain, Michael Gershon described how these multitudes of neurons allow us to “feel” our intestinal functioning. Beyond just informing us about what that pepperoni pizza is doing, this somatic information can be helpful in decision-making, psychosocial functioning, and regulating our affective states. A recent study even found differences in brain activity based on the microbiota of 40 women (Tillisch et al., 2017). Specifically, they found that women with different levels of two strains of bacteria (prevotella and bacteroids) demonstrated differences in hippocampal activity, as well as activity in regions of the brain related to emotional, attentional, and sensory processing, in response to negative mood-inducing images. The more we investigate this gut-brain connection, the more far-reaching the influence of gut microbiota.

When we speak about our feelings, what language do we typically use? How many of us have ever used the phrase “heartwarming” to describe a tender moment, or admitted to having “cold feet” before making an important decision? When we’re nervous and claim to have “butterflies in the stomach,” it’s generally understood that there are aren’t actual insects flapping around in our intestines. Yet, we continue to use these somatically centered phrases to explain how we’re feeling. Our understanding of emotion is closely tied to the bodily metaphors that we use to describe and communicate our internal experiences.

Previous research on the gut-brain axis has identified a strong connection between our affective feeling states and the numerous neurotransmitters that reside in our gut microbiota (Lerner, Neidhöfer & Matthias, 2017; Chahwan et al., 2019). In some cases, treatment-resistant depression is managed by a surgical procedure that mechanically stimulates the vagus nerve, one of the body’s most potent modulators of parasympathetic control (Careno & Frazer, 2017). The vagus nerve stretches from the brain down to the digestive tract, and, given that it sends information in both directions, it should come as no surprise that it is proving itself to be a primary player in improving the health and well-being of those experiencing severe emotional distress.

Promoting Well-Being in Times of Stress

As humans, we perceive feelings from our bodies that relate to our state of well-being, energy and stress levels, and mood and disposition. And while all humans experience stress at different points in their everyday life, it has been found that graduate students often experience a relatively consistent level of stress that is greater than that of the general population. With the information we now have on the gut-brain connection, there are several ways we can target this relationship to help improve the well-being and emotional health of students experiencing strain in their busy graduate school careers.

Interoception, defined by neuroscientist Bud Craig (2004) as “subjective awareness of inner feelings,” is the sense of the body’s physiological condition. Pain, temperature, heart rate, arousal, and digestion are all visceral sensations that can be detected through interoception. Focusing more on this lesser-known “sixth sense” to gain interoceptive awareness can help regulate internal processes, as well as improve the detection of bodily changes that may indicate increased muscle tension and stress. Practicing meditation and mindfulness on a daily basis can help facilitate this process, as both emphasize “noticing” and help individuals become more aware of how their body feels during different affective experiences.

In addition to promoting a greater sense of internal awareness, small adjustments in diet can also help foster a more diverse and healthy gut flora. The microbiota consists of numerous microorganisms and bacteria that reside in our digestive tract and influence our metabolic health. Probiotics are microorganisms that can aid digestion and help promote gut health, providing support for our second brain. Certain fermented foods, like kimchi and yogurt, as well as drinks like kombucha, can be simple and delicious ways to deliver healthy support for this connection. As we continue to spend more time in our homes due to COVID-19, it is important to pay particular attention to the foods we’re eating and ensure that our diet is providing the energy and support we need. The supply chain of fermented foods does not seem to have been disrupted, and these items can still be readily purchased from nearly all local grocery stores at this time.

Lastly, merely listening to your stomach is an important skill to practice. The term “gut feeling” has been referenced in the development of numerous theoretical perspectives in decision-making and emotion science (i.e., somatic marker hypothesis) for a reason. As previously noted, the gut-brain connection involves various neurotransmitters that influence our feelings and emotions. High comorbidity between anxiety disorders and irritable bowel syndrome supports the idea that when something is wrong, it often physically manifests in our stomach. Think of it as a digestive alarm system, letting us know when we might be overworked, upset, or feeling a little too stressed out. By paying attention to these internal cues, we can practice greater inner awareness and self-care—one cup of yogurt at a time.

Pietra Bruni is a clinical psychology PhD student at Vanderbilt University. Her research primarily focuses on social-emotional expertise (SEE) and its association with related constructs, such as interoception, nonverbal behavior, and emotional granularity. She can be reached at pietra.t.bruni@vanderbilt.edu and on Twitter/Instagram at @pietra_bruni.

Student Notebook: How Sexual Boredom Turned Into a Good Thrill