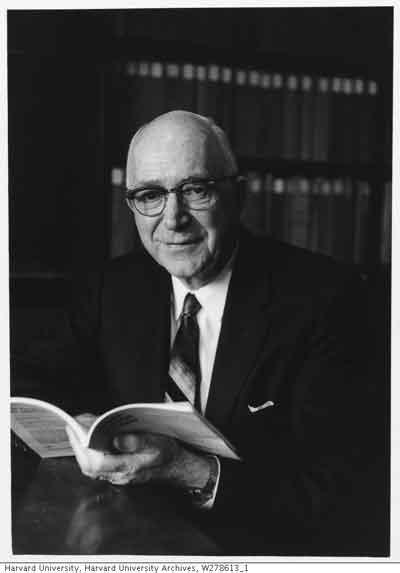 Gordon Willard Allport (GWA) was a giant as a scholar. As he progressed from one major topic to another — the self, attitudes, and prejudice in social psychology; traits, values, and functional autonomy of motives in personality — he left us with comprehensive reviews in books, chapters, or journal articles, each providing a framework that encompassed the range of theories in the topic’s history. His reviews aided many later scholars’ efforts — offering not only one-stop historical educations, but also theoretical starting points on which they could build.

When Richard Evans interviewed Allport in 1966, GWA was terminally ill with cancer. Fortunately, the illness had not dimmed any aspect of GWA’s lucidity. And Evans succeeded in drawing GWA out on most of the major scholarly topics to which GWA had devoted his career.

Although GWA was known primarily for his theoretical and scholarly contributions, that career was also defined by his service to the professional disciplines of social psychology and personality and to Harvard University, the institution to which he was connected from his arrival as a student in 1915 to his death in 1967. GWA’s devotion to Harvard explains how I managed to become one of his last PhD advisees, a boon to me that came about because of his 18-year service as chair of the Department of Social Relations Committee on Higher Degrees. When (in 1962) the third of my previous faculty advisors departed for a post elsewhere, GWA took me under his grandfatherly wing. Alas, I did not adequately appreciate him during the year in which he helped me to complete my dissertation. Fortunately, however, my debt to GWA became more than fully clear to me as I successively took up three topics on which he had left strong imprints — attitudes, the self, and prejudice.

GWA’s comments in this interview made clear both what has subsequently changed in personality and social psychology, and what has endured. Freud’s presence in the interview stands in striking juxtaposition to the near absence of mentions of Freud in contemporary scholarship of social psychology and personality. Stimulus–response (S–R) theory was also repeatedly mentioned. Those two bodies of theory (psychoanalytic theory and S–R) dominated my undergraduate and graduate education. I believe that they are not much more than historical curiosities to today’s students of social psychology and personality.

The lost influence of both psychoanalytic and S–R theories may also explain the present-day disappearance of another term: functional autonomy. Functional autonomy of motives is an idea singularly linked to Gordon Allport’s name. This is the view that acquired (adult) motives become energetically independent of the psychosexual drives (Freud) or biological needs (S–R theory) on which their acquisition presumably rested. Modern inattention to functional autonomy may follow from the decline of the theories (psychoanalytic and S–R) that postulated the dependence of acquired motives on innate energy sources, leaving GWA’s view of functional autonomy effectively unopposed. It appears that his view is now so widely accepted as not to inspire active theoretical attention.

Another highly provocative aspect of the interview came from its discussions of two debates that (unlike psychoanalytic and S–R theory) remain very active today. These enduring debates focused on methodological issues in personality assessment. One debate concerned the relative values of nomothetic vs. idiographic methods. The other concerned the relative values of methods targeted at conscious vs. unconscious processes.

Nomothetic approaches locate people on trait dimensions that are theorized to apply to all individuals (a contemporary example is the Big 5). In contrast, idiographic approaches seek to describe the uniqueness of personalities (a currently dominant example is Mischel and Shoda’s Cognitive–Affective Processing System). Although GWA acknowledged the usefulness of both approaches, he clearly favored the idiographic (“If you want to compare people on dimensions, I’m all for that, but you mustn’t confuse the fact that you’re studying individual comparisons on dimensions with the totality of the individual personality. . . . Each person has within himself a distinctive pattern of interaction”).

On measurement methods designed to reveal unconscious motivation, GWA must have been most mindful of the Thematic Apperception Test (TAT) — a projective measurement method that was championed by his Harvard colleagues Henry Murray and David McClelland. When Evans asked, “Do you think projective tests have a legitimate place in psychological research?” GWA replied, “Yes, I certainly do feel they have a place. What I’ve said about them is that they should never be used without also using direct methods. . . . Contrary to Freud, I suspect that most of our conflicts are very conscious.”

Almost without acknowledging that it also had to do with the contrast between conscious and unconscious, in describing his views on prejudice, GWA commented, “I think man has a great deal more freedom than he ever uses, simply because he operates out of habits, prejudices and stereotypes, often going off, as it were, half-cocked.” The half-cocked metaphor refers to the premature firing of a pistol that requires a manual setting to fire. His statement suggests that prejudices and stereotypes often occur without thought — i.e., unthinkingly. Now that prejudice has become one of my main areas of research, I would love to discuss this topic with social psychology’s premier expert on prejudice — my former PhD advisor — to seek his appraisal of the current view that unthinking (“implicit”) processes play a major role in stereotypes and prejudices.

Did you “bump” into Stanley Milgram at Harvard? I believe Stanley’s advisor also was GWA (Asch was also a strong influence). Very interesting comments on GWA. Even the idea of a Department of Social Relations, so arcane for decades, will likely return as academe appears to suffer from inefficient separatism and old-fashioned isolation within disciplines. GWA’s (1954) chapter title, “The normality of pre-judgment,” will always be so classic and prognostic of what was to come.

Anthony G. Greenwald is Professor of Psychology at the University of Washington.  He is known for inventing the Implicit Association Test and for his work developing replicable empirical methods to study unconscious cognition, including "subliminal" phenomena. Greenwald can be reached at agg@u.washington.edu.