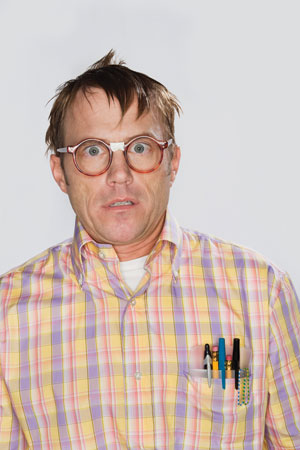 “Mike” (not his real name, which is Lamont) has been living with a Fashion Disorder his entire life. He has trouble making the basic everyday choices about clothes people make every day – from matching his belt to his shoes to shaving off his soul-patch. And Mike isn’t alone – over 35% of Americans have the disorder, even though very few of them recognize their condition and even fewer seek treatment. Those of us who have to look at them are the ones who suffer.

But that’s about to change. The American Psychiatric Association (APA) has announced the addition of Fashion Disorder (FD) to the next edition of the Diagnostic and Statistical Manual of Made-Up Disorders, the DSM. The APA also plans to include the disorder in other publications, including DSM-Milan and Teen DSM, allowing people like Mike to be diagnosed and treated so that they can begin to dress like normal, healthy human beings.

Fashion disorder can take many forms, but its identifying feature is a lack of stylistic competence, which is typically evidenced by garment gaffes, fashion faux pas, wardrobe malfunctions and a general lack of taste. For those suffering from the disease, plaids may appear to match with stripes, socks can be worn with sandals, and white can be worn after Labor Day. Unfortunately, FD is degenerative, with fashion decisions becoming more and more deranged as the individual ages.

Mike suffers from the most common form of the disorder, Generalized Fashion Disorder (GFD). GFD can be thought of as a sort of clothing dyslexia – instead of perceiving his outfit as tacky, Mike perceives the outfit as a conglomeration of meaningless garments. There is no good taste or bad taste to an individual with GFD. This subtype of FD has previously been known informally as “Straight White Male Syndrome” and “The Early Nineties”.

Other recognized subtypes include Fashion Oppositional Disorder, which affects individuals who can consciously understand the basic rules of fashion but find themselves driven to challenge them. Fashion Identity Disorder affects people who fail to perceive their own age and age-appropriate fashions in choosing outfits for themselves. Mom Jeans Disorder, the postpartum urge to wear unflattering, high-waist denim pants, is likely to be categorized in the Fashion Disorder spectrum.

Some members have objected to the diagnostic category. Margaret Walsh of UC-Sunnydale has argued that “fashion is a personal decision, and a failure to conform to universal laws of style is less a disorder and more a personal quirk.” However, Dr. Walsh was wearing a white cotton turtleneck at the time, with sea-green tapered pants that ended five inches above her ankles, white tube socks and sandals. Enough said.

The official recognition of FD as a diagnosable condition is a giant step forward for civilization. Providing the support and treatment that is desperately needed by Mike and others like him may sound like altruism but remember if FD is left untreated, we’re the real victims.

This is an arictle that makes you think “never thought of that!”