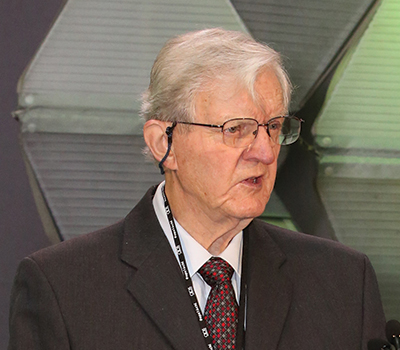 APS Past President Gordon H. Bower began his graduate psychology career with a strong interest in the behaviorist learning theory of Clark Hull, which centers on Pavlovian conditioning and stimulus–response theory. After Bower met William K. Estes at a mathematical-learning-theory conference, he also became enthusiastic about Estes’s stimulus-sampling theory, which posits that each stimulus element is connected to a reference response that the experimenter is measuring. At the APS–Psychonomic Society W. K. & K. W. Estes Lecture at the 2016 APS Annual Convention in Chicago, Bower described his work to integrate these theories and also reflected on his friendship with Estes. Coverage of Bower’s lecture will appear in an upcoming issue of the Observer.

In this year’s symposium for the journal Psychological Science in the Public Interest (PSPI), APS Fellow Tammy D. Allen (top left) discussed a 2015 PSPI report she coauthored showing the factors that lead to successful telework plans for organizations. APS Fellow Tom R. Tyler (top right) of Yale Law School and Duke University economist Philip J. Cook (bottom) discussed findings from a February 2016 report on the factors that drive public trust — and fuel distrust — in police and other law enforcers. Tyler was lead author on the report, which found that many widely used police practices are seen as unfair and have compromised people’s view of the police as a legitimate legal authority. Cook, who wrote a commentary that accompanied that report, noted that deterrence-based police activity can still have an effective role in curbing crime. 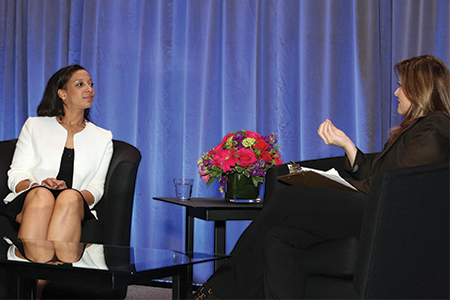 APS Past Board Member Jennifer A. Richeson (left) has amassed extensive findings about the difficulties people experience interacting across racial boundaries. Richeson discusses her life’s work and the personal history that led her into a psychological research career in a conversation with APS Past Board Member Wendy Berry Mendes for “Inside the Psychologist’s Studio.” This latest interview in the “Inside the Psychologist’s Studio” video series will appear soon on the APS website. 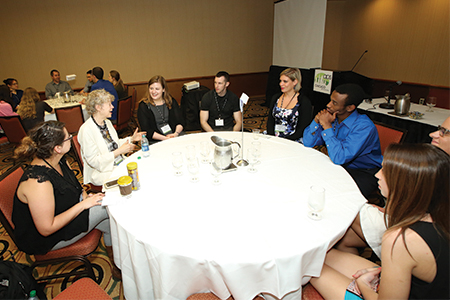 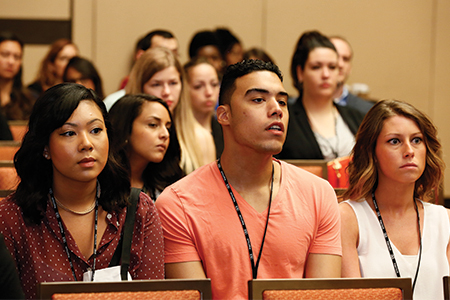 Students and researchers packed meeting rooms to learn new information on a range of scientific topics, including behavior change, time perception, and new research methodologies. More than 4,300 professors and students attended the convention. 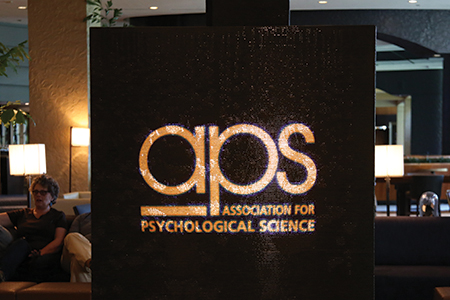 The fountain of water in the Sheraton Grand Chicago hotel lobby was lit up with the APS logo in honor of the convention. 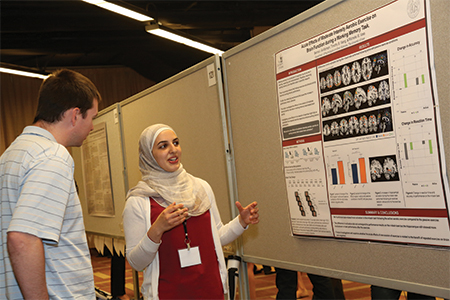 Seima I. Al-Momani presents her poster on the effects of aerobic exercise on brain function during a task that measures working memory. More than 2,700 posters were accepted for the convention. 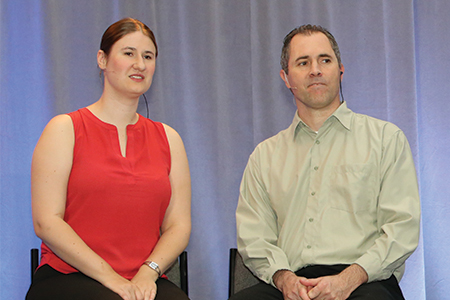 In a workshop sponsored by APS and the Society of Multivariate Experimental Psychology, APS Fellow Brian Nosek and Courtney Soderberg outline data management, preregistration, and collaborations designed to improve reproducibility of psychological research. Nosek is director of the Center for Open Science, where Soderberg is a statistical consultant. A video of the workshop will be available later this year on the APS website. 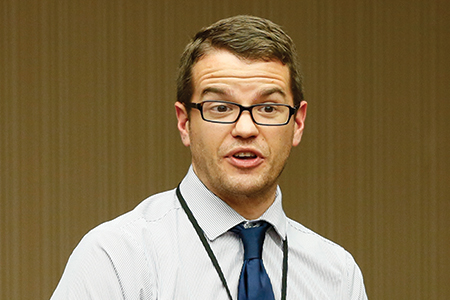 Psychological scientist David Yokum, a Fellow of the White House Social and Behavioral Sciences Team (SBST), tells attendees about the opportunities open to psychological researchers interested in informing public policy through science. Yokum is also a Senior Policy Advisor for the District of Columbia City Administrator. Working in entities like SBST gives psychological scientists the chance to see their research applied directly and also exposes them to an array of problems that can be targets for new research pursuits, he says. 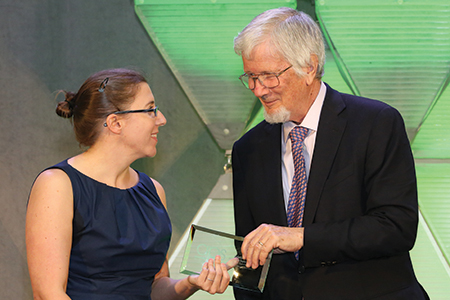 In an APS-Psychonomic Society W.K. & K.W. Estes Lecture, APS Past President and US National Medal of Science Laureate Gordon H. Bower delivers a 60-year retrospective on his attempts to integrate the
learning theories of his late mentor William K. Estes with those of the influential learning theorist Clark L. Hull.

Changing Habits for the Long Haul

Diagnosing physical ailments used to depend exclusively on symptoms and observations, but a prodigious surge in new technology has provided 21st century medicine with an array of precision diagnostic tools — from biomarkers to genetic