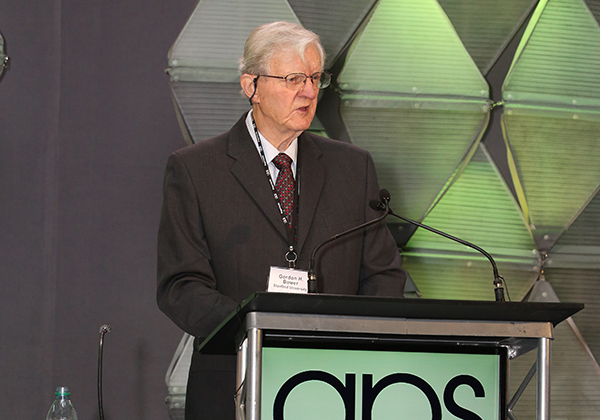 APS Past President Gordon H. Bower is a pioneering psychological scientist and a National Medal of Science winner — but even luminaries like Bower have their mentors. In the APS–Psychonomic Society W. K. & K. W. Estes Lecture at the 2016 APS Annual Convention in Chicago, Bower spoke about his relationship with the late William K. Estes and his work to build on Estes’s theories, a journey of both personal and scientific gains.

Estes himself was a pioneer in mathematical psychology, a National Medal of Science winner, and the Founding Editor of APS’s flagship journal, Psychological Science. His wife, Katherine “Kay” W. Estes, was the Founding Managing Editor of the journal.

During his address, Bower described time he spent relating Estes’s research to that of influential learning theorist Clark L. Hull. Bower discussed his time in graduate school at Yale University, where Hull’s stimulus–response theory was regarded as the major theory of learning and memory at the time. But when Bower met Estes during a workshop at Stanford University, he brought back to Yale a newfound appreciation for Estes’s theory of learning, called the stimulus sampling theory. Bower soon became committed to bridging the gap between these two theories.

According to Bower, Hull’s theory arose from psychology’s behaviorism movement as an attempt to determine fundamental principles of learning arising from hundreds of studies being conducted on animal conditioning. Hull believed that researchers could summarize the effect of learning conditions to obtain a measure called degree of conditioning. Hull’s degree of conditioning was defined as a product of habit strength due to past training, the distinctiveness or intensity of the conditioned stimulus, the animal’s relevant motivation level, the magnitude and the quality of the reward, and the delay of the reward following the response.

“Hull always viewed his set of principles not as an end in themselves but as the basis for deriving explanations for many other behavioral observations,” said Bower.

On the other hand, Estes’s theory was more abstract, Bower said. According to Estes, learning gave rise to “a large population of dozens of little stimulus aspects … called stimulus elements.” On any given learning trial, only a sample of these elements are noticed — kind of like drawing marbles from a bag. When a majority of these marbles are associated with a certain response, the response occurs. Learning increases as these stimulus elements become more and more associated with certain responses.

Estes posited that stimulus aspects arise from various factors such as the experimental apparatus used, subjects’ internal states, and extraneous stimuli not associated with any outcome.

Over the course of his talk, Bower described in great depth the apparent differences
between the two theories and how, via a process of careful translation, the two theories give rise to virtually identical mathematical equations, bridging the gap between the two theories, and, according to Bower, putting Estes’s stimulus sampling theory “on an equal footing with the theories of Hull and [Edward] Tolman that were so dominant in those waning days of the grand learning theories.”

Eventually, Bower and his colleagues moved on from his theory-bridging efforts to other topics.

“Although such speculations might have been noteworthy at the time, I never published any of it and Bill published only a little bit … in retrospect, the speculations are very much confined to their historical time capsule. Moreover, beginning in 1960, Bill and I both joined the cognitive revolution and essentially moved on to studies of human memory and category learning.”

Bower ended his talk by reflecting on the personal importance of the time he spent working with Estes, noting that Estes’s mentorship fostered his strong interest in mathematical psychology.

“Not only was [Estes] a superbly creative scientist, he had an enormous impact on our field. I feel lucky to have known him so well for so many years,” he finished.

Changing Habits for the Long Haul

Diagnosing physical ailments used to depend exclusively on symptoms and observations, but a prodigious surge in new technology has provided 21st century medicine with an array of precision diagnostic tools — from biomarkers to genetic