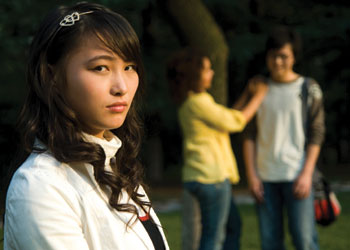 When South Carolina Governor Mark Sanford was caught red-handed returning from a tryst with his Argentine mistress last June, he told the Associated Press that he had met his “soul mate.” His choice of words seemed to suggest that having a deep emotional and spiritual connection with Maria Belen Chapur somehow made his sexual infidelity to his wife Jenny Sanford less tawdry.

Jenny Sanford wasn’t buying it, and neither would most women. What the two-timing governor didn’t understand is that most women view emotional infidelity as worse, not better, than sexual betrayal. Publicly acknowledging a soul connection was probably the most insulting and hurtful thing he could have said to his wife of 20 years.

The clueless governor is not alone. Research has documented that most men become much more jealous about sexual infidelity than they do about emotional infidelity. Women are the opposite, and this is true all over the world. Just why this is the case is not fully understood, although the prevailing theory is that the difference has evolutionary origins: Men learned over eons to be hyper-vigilant about sex because they can never be absolutely certain they are the father of a child, whereas women are much more concerned about having a partner who is committed to raising a family.

New research now suggests an alternative explanation. The new studies do not question the fundamental gender difference regarding jealousy — indeed, they add additional support for that difference. But the new science suggests that the difference may be rooted more in personality — specifically in traits like self-reliance and insecurity.

Pennsylvania State University scientists Kenneth Levy and Kristen Kelly doubted the evolutionary explanation because there is a conspicuous subset of men who are more like women. That is, they find emotional betrayal more distressing than sexual infidelity. Why would this be? The researchers suspected that it might have to do with trust and emotional attachment. Some people — men and women alike — are by nature more secure in their attachments to others, whereas others are more invested in their own autonomy and seemingly less in need of intimacy. Psychologists see this compulsive self-reliance as a defensive strategy — protection against deep-seated feelings of vulnerability. People high on this trait tend to be preoccupied with the sexual aspects of relationships rather than emotional intimacy.

Levy and Kelly decided to explore a possible link between attachment style and jealousy style, and they did this by running a group of volunteers through some standard psychological tests. One questionnaire measured whether the volunteers were secure in their romantic relationships, or whether they instead were avoidant and noncommittal. A second questionnaire asked which they would find more distressing — knowing their partner was off having passionate sexual intercourse with someone else, or knowing that same partner had formed a deep emotional attachment with someone else.

They sorted the data, and the conclusions were indisputable. As the scientists reported in Psychological Science, avoidant types — those who prize their autonomy in relationships over commitment — were much more upset about sexual infidelity than emotional infidelity. And conversely, emotionally secure volunteers — including secure men — were much more likely to find emotional betrayal more upsetting.

But here’s the interesting twist. Just like all the earlier studies, Levy and Kelly found clear evidence of a gender difference in jealousy style. In other words, men are indeed preoccupied with sexual betrayal, and women the reverse, but not for the reasons we thought. Men fret about sexual betrayal because they are overly invested in the sexual side of their own relationships — and that superficiality is linked to their thin personal attachments. Not to put too fine a point on it, male jealousy is shaped by deep emotional insecurities. Jenny Sanford probably knew that already, and the governor’s soul mate is no doubt having her suspicions by now.