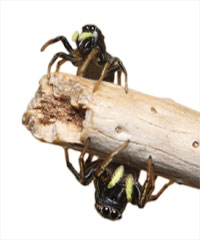 Wouldn’t life be easy if everything happened as we anticipated? Luckily we have the orbitofrontal cortex, the area of the brain that adapts to the unexpected to make and monitor predictions about the world.

Patients with damage to this area confuse memories with reality and continue to anticipate events that are no longer likely to happen. The brain’s ability to react adaptively is crucial for survival when faced with potential dangers, such as snakes and spiders. To what extent does the harmfulness of an anticipated outcome affect our brain’s event monitoring system? Not at all, reveals a new study published in the February 2011 issue of Cortex: the processes are the same, regardless how scary the anticipated event.

A team of researchers, led by Armin Schnider, University Hospitals of Geneva, Switzerland, recorded functional magnetic resonance images (fMRI) while healthy volunteers performed a task in which they repeatedly saw a pair of faces and had to predict on which face a target was about to appear. The target could be a simple black disk (neutral stimulus) or a spider (potentially harmful stimulus). The researchers found a strong activation of the brain’s visual areas whenever the spider appeared. However, irrespective of whether the disk or the spider was the target, its unexpected absence activated a cerebral network including the orbitofrontal cortex.

The findings show that, while the potential harmfulness of an event strongly affects brain responses, it does not influence the way the brain reacts when the expected event does not occur. The study supports the notion that the orbitofrontal cortex is “at the centre of a specific cerebral network which functions as a generic outcome monitoring system” says Louis Nahum, the first author of the study. “This capacity is probably as old in evolution as the instinctive reaction to threatening stimuli; its failure deprives the brain of the ability to remain in phase with reality”, notes Schnider.