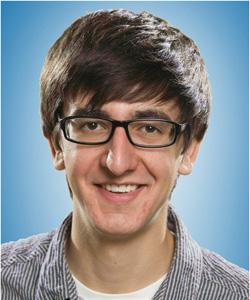 Four years ago, I would have chuckled if I had seen the words “psychology” and “science” used in the same sentence without a “not” in between. Science was biology, chemistry, physics — after all, those were the subjects waiting for you when you got to “science” class. Psychology, on the other hand, was Freud and red chaise lounges and the balding white man whom my classmate Matt Darning had to go see in first grade after he pulled his pants down during gym for the third time. To the surprise of my sophomore self, today I’m slated to study Evidence-Based Social Intervention at Oxford on a Rhodes Scholarship and planning to pursue a PhD in social psychology afterward. The case study of my conversion from detractor to disciple highlights how our field can forge a reputation for itself that’s both psychological and scientific, without a “not” in sight.

It wasn’t until I came to college that I encountered psychology as a method of inquiry complete with all the accoutrements of “real” science. My eyes widened as my professors fired up their PowerPoints. Graphs? Independent and dependent variables? Error bars?! Suddenly, here was the methodology and rigor of science applied to topics that directly mattered to my life. What’s more, I was invited — well, more accurately, required, by the Department of Psychology, but let’s not split hairs — to take part in this scientific process in a meaningful way. In a field so young and closely focused on human life, I could observe people doing what they do and design a research program to explore why, exactly, they do it that way. I fell in love.

And like any true love, I knew psychology was the one when I realized it would help me pursue my passions. As a comedic improviser and sketchwriter, I’ve noticed that people rarely laugh out loud while alone. Studying this phenomenon for the past 2 years with my advisor, Susan Fiske, I’ve demonstrated that people are perfectly capable of experiencing humor when solo — in fact, ratings of funniness tend to drop when you introduce another person into the mix. It turns out that people are highly motivated not to find humor significantly funnier than those around them, and to use others’ reactions to inform their own, or even to infer others’ reactions when they can’t know for sure. People may think that appearing equally or more discerning than their coactors pays them some kind of social dividend, but they’re wrong: Participants consistently find people who show more appreciation for humor to be significantly warmer — and not any less competent — than someone who is stiff-lipped. Psychology and I are barely past our honeymoon, but I think this relationship is going to last.

If the conversations I’ve had with hometown acquaintances, underclassmen choosing majors, and strangers in airports are any indication, however, most people still do not understand that psychology allows you ask questions about human life and behavior and answer them empirically (most of them think it allows you to figure out why their sister’s kid is so gosh darn hyper). That’s trouble, because the questions psychology can answer are some of the most important in our everyday lives: How can I be happy? What keeps people stuck in poverty? If racism is out of style, why is it still hard for minorities to get ahead? Psychology has scientifically validated answers to those questions that can improve people’s lives, or at least help them understand life a little better. But no one will listen so long as their image of psychology is the therapist on The Sopranos.

As a recent convert, I’ve seen firsthand how that can change. Students graduate high school knowing more about mitochondria than the human mind, although sometimes not much about either. As APS President Elizabeth Phelps recently pointed out, however, introductory psychology is consistently one of the most popular classes on college campuses. While we don’t need to convert every PSY101 lecture hall into a legion of psychological scientists — in fact, please don’t, because I’d like to have a job someday — anyone within the grasp of a psychology curriculum is a priceless opportunity for the field. Those students will go on to be businesspeople and senators and systems analysts and chefs and pundits and filmmakers and moms and dads. If they learn to trust psychology as a science, they’ll better understand themselves and others, and they’ll be more outspoken advocates for and consumers of psychology in the careers they pursue. Maybe one day psychology will be allowed into elementary and high school “science” curricula, but for now, you psychological scientists are our only hope.

And of course, people savvy in psychological science will know not to make a fuss the next time Matt drops his drawers in gym. The attention is a classic case of reinforcement.

will graduate in June with a BA in psychology from Princeton University, where he studies with APS Past President Susan Fiske. He is a 2014 Rhodes Scholar-Elect, and wastes most of his time on improv and sketch comedy. He can be reached at amastroi@princeton.edu.

Words of wisdom from all 21 recipients of APS’s awards for major contributions to psychological science. More

Learn about the four APS Fellows honored for their dedication to fostering the careers of students and colleagues. More

Barch was selected for “helping to identify neural and psychological mechanisms that give rise to the symptoms of psychosis and other forms of mental illness.” More