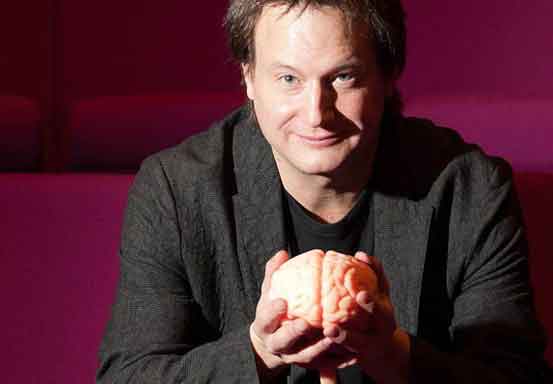 In 2011, APS Fellow Bruce Hood presented the Royal Institution of Great Britain Christmas Lectures. The Christmas Lectures, which have been held each year since 1825, are a series of talks on a single theme that changes each year. The lectures are broadcast on UK television and have been part of the British Christmas tradition for generations.

Hood, who is the Director of the Bristol Cognitive Development Centre at the University of Bristol, UK, spoke about the theme “Meet Your Brain.” In his series of talks Hood explained how the external world is represented in different parts of the brain, the role of executive control, and social specialization of the brain.

Following the 2011 lectures, Hood and colleague Nathalia Gjersoe created The BrainBank, an online teaching resource based on his presentations. The BrainBank includes a collection of demonstrations and activities used by psychological scientists and neuroscientists to communicate different aspects of brain function. The content is divided into three sections mirroring the Christmas Lectures set-up — Brain Biology, Brain Function, and The Social Brain — to help educators find the demonstrations that are most relevant. Each section includes video clips and demonstrations for instructors to use and the site offers video embed codes and slides that are easily downloaded.

In developing The BrainBank, Hood surveyed audience members from the 2011 Christmas Lectures to explore what demonstrations were the most effective, the most memorable, and the most enjoyable. The BrainBank incorporated the 60 demonstrations that worked best and were best remembered by the largest number of students.

“The experience of giving the lectures is one that I will never forget but like many unusual events in life, already seems unreal and distant,” says Hood. “This site and the work that has gone into building it has helped to remind me of the great time I had and hopefully will become a valuable resource for those interested in stimulating the minds of the next generation of scientists.”