This year marks a milestone for APS — our 25th anniversary. The milestone was celebrated at the 25th APS Annual Convention with a birthday party and concert featuring APS’s super group, which includes recording artists and featured psychological scientists Daniel J. Levitin and APS Past President Robert W. Levenson, who also received an inaugural APS Mentor Award this year.

The celebration continues all year long with a collection of retrospectives by distinguished scientists in the Observer and in the journal Perspectives on Psychological Science. These articles celebrate our science, looking at profound changes in our field over the past 25 years since APS was formed in 1988.

“APS was founded to be a new voice, a dedicated voice, for psychological science, in order to increase public understanding and support for our field,” said APS President Joseph E. Steinmetz during the opening ceremony kicking off the convention. “The association has been uniquely effective in that role. Thanks to APS, there has been a significant increase in federal funding for basic and applied behavioral and social science research over the years and an unprecedented visibility for psychological science.”

APS started with just 400 psychological scientists and thanks to the dedication of the association’s Charter Members, 25 years later APS has grown to 25,000. The association publishes the field’s most prestigious journals; is widely recognized as the most effective voice for scientific psychology in the public arena; and of course, organizes a wonderful Annual Convention (as you can see in this special issue) — all in the interest of advancing psychological science for the greater good.

In the past 25 years, the growth of psychological science has been nothing short of dramatic. We can celebrate many advances in our understanding of behavior and how we interact and connect with our world.

In honor of APS’s birthday, 25 distinguished scientists whose work has been particularly influential on the field of psychological science over the past quarter century were honored with special William James and James McKeen Cattell awards. Their lifetime of contributions to the field are being profiled in the Observer throughout the year.

We can all be extremely proud of this organization and of our discipline.

Michael Gazzaniga delivers his keynote address on “Unity in a Modular World” to a packed house. After the keynote, a special book signing gave attendees the chance to meet Gazzaniga in person. 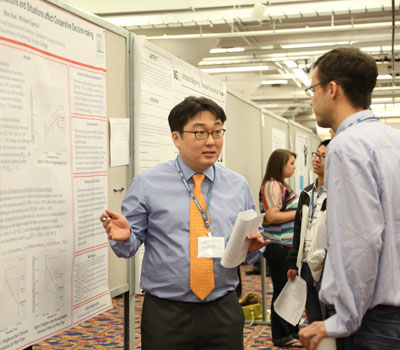 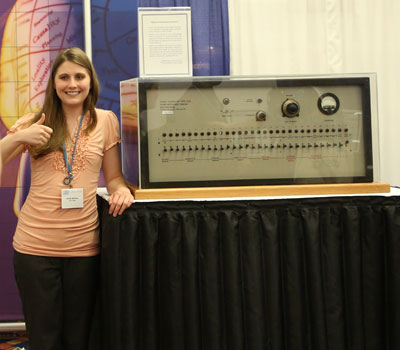 Shelby Williams, Berea College, poses next to the original shock box used in the classic Stanley Milgram obedience experiments. It was brought to the APS Convention by the Center for the History of Psychology. 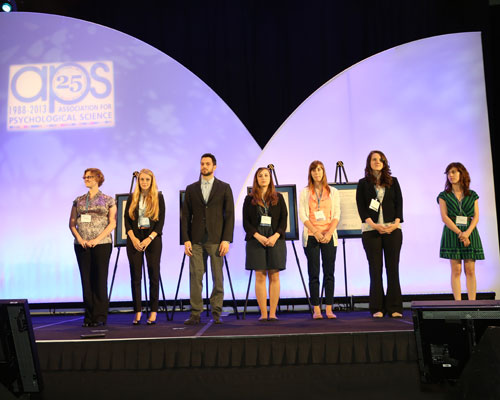 The 2013 APSSC Student Research Award and RISE Award winners are honored during the opening ceremony. 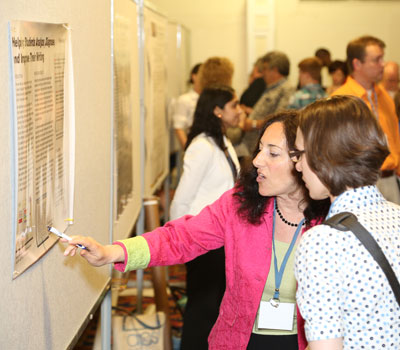 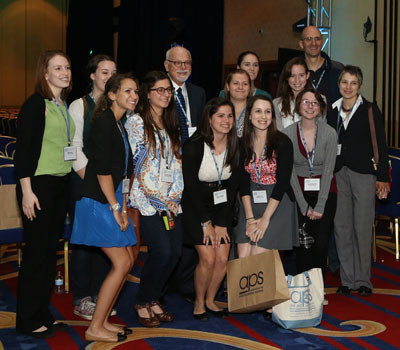 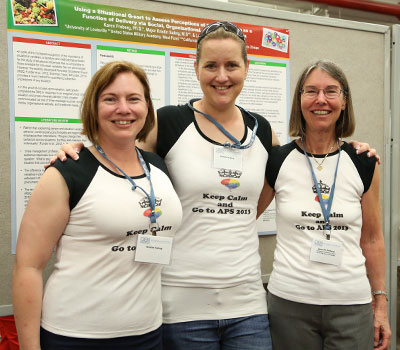 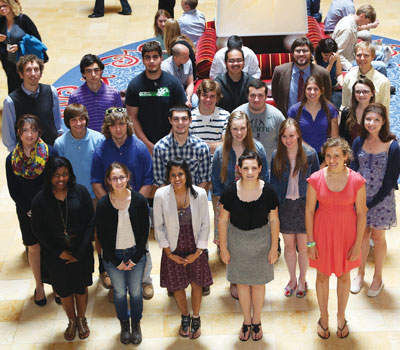 APS member Brad Wray, a teacher at Arundel High School in Maryland, brought a large group of high school students to the Convention. Kaelin L. Holdaway, Ashleigh Rama, and Taylor Rama presented a poster on “An Assessment of the Validity of a Self-Scored Creativity Test.” 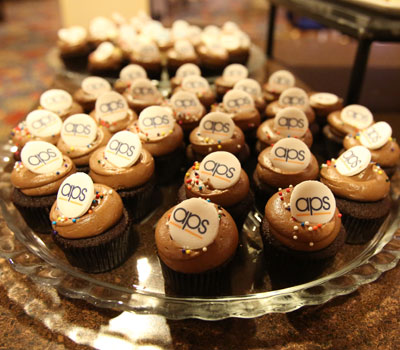 Birthday treats for attendees at the Saturday night concert! 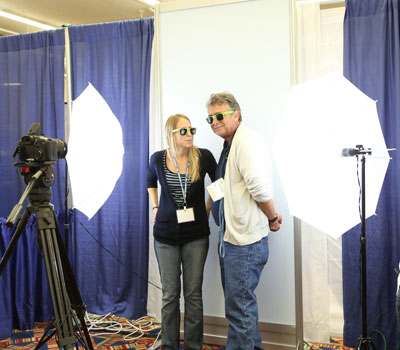 Attendees strike a pose at the Exhibit Hall photo booth. 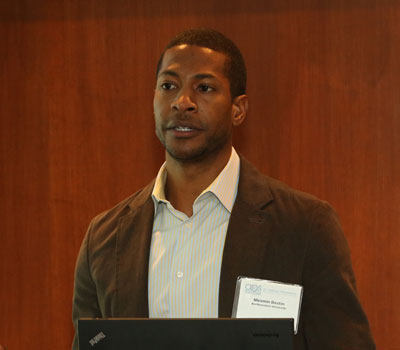 Mesmin Destin, Northwestern University, speaks on Symposium Sunday in the program “When and How Social-Class Makes a Difference.” 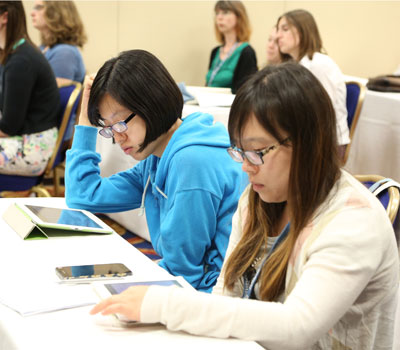 Attendees use their smartphones and tablets, where they could access the 2013 APS Convention App.

The Convention gets off to a thundering start with a marching band performance from DC’s Ballou High School drum line. 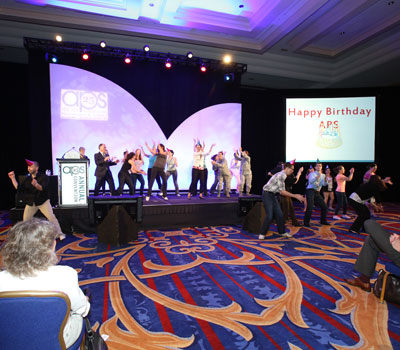 On opening night more than 30 attendees break into a choreographed dance while The Beatles’ “Birthday” blares from the loudspeaker. See if you can spot EPS Executive Director Alan G. Kraut on stage. 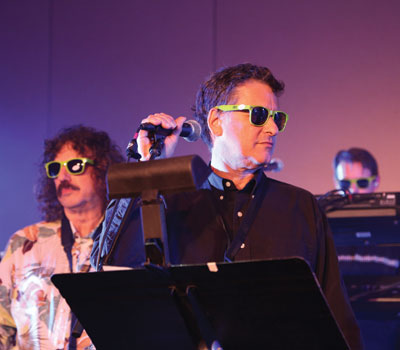 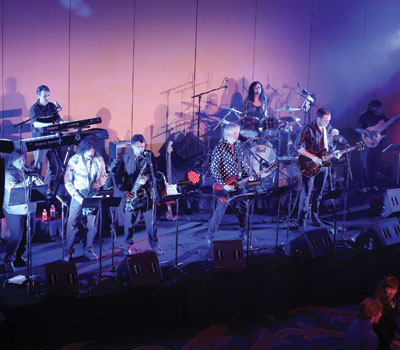 The music of the 80s is revived at the 25@25 Celebration and Special Concert. 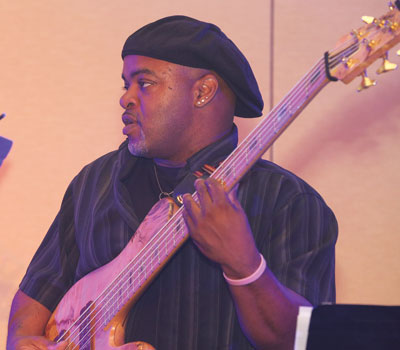 Anthony Wellington is shredding on the bass. 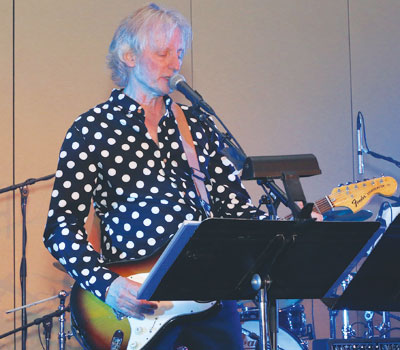 Recording artist Parthenon Huxley sings and plays the guitar to a lively crowd.