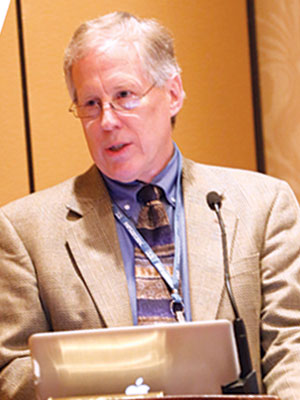 For years, practitioners and researchers alike have been anticipating the completion of the new Diagnostic and Statistical Manual, the DSM-5. Those following the creation and release of this new manual have surely heard the controversy and conflict surrounding the changes and revisions included in this new issue. Among the many criticisms of the manual are arguments that DSM lacks validity because the diagnoses are based on clusters of symptoms rather than on objective laboratory measures. The National Institute of Mental Health (NIMH) recognized this weakness inherent in the DSM diagnosis system and felt that mental health patients deserved better. As early as 2008, the NIMH began working on developing new ways of classifying and researching mental disorders based on dimensions of observable behavior and neurobiological measures.

Bruce Cuthbert of the NIMH was on hand at this year’s 25th  APS Annual Convention to discuss the NIMH’s new framework for researching mental health disorders — the Research Domain Criteria Project (RDoC). The RDoC project represents a new way to conceptualize research into psychopathology. This new research framework can be conceptualized as a matrix, in which research constructs form the rows of the matrix and include five main domains: Negative Valence Systems, Positive Valence Systems, Cognitive Systems, Systems for Social Processes, and Arousal/Regulatory Systems. The columns of the matrix are comprised of units of analysis that represent different classes of variables that can be used to study each construct, such as genes, molecules, cells, neural circuits, physiology, behaviors, self-reports, and paradigms. The NIMH anticipates researchers using this matrix as a scaffold for the creation of new projects, and as a way to quickly organize and identify what we know about a topic and areas where future research is needed.

The RDoC system presents a new way of conducting research relating to mental disorders, but how do psychological scientists view this new framework? APS James McKeen Cattell Fellow Elaine Walker of Emory University and Robert Krueger of the University of Minnesota shared their views on the strengths and weaknesses of the RDoC program. Both researchers noted some areas that could use improvement, such as the fact that NIMH may need to provide more guidance on how traditional conceptualizations of psychopathology fit into the new NIMH constructs, and that there needs to be a recognition that there is often a discontinuity between the neurobiological underpinnings of a disorder and its behavioral manifestation. Despite these concerns, both discussants seemed to view the matrix as a step forward in the current conceptualization of psychopathology, and as an effective method for promoting an integrative approach to mental health research.