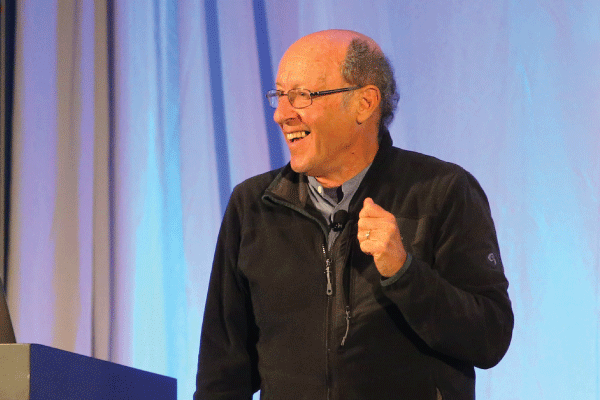 Back in the late 1800s, when psychological science was, in William James’ words, “only the hope of a science,” he understood that there were different kinds of memory and that habits and memory operated separately.

James introduced the field “to the idea that there were different kinds of memory, although there were inklings of it prior to him,” said Lynn Nadel, a professor of psychology at the University of Arizona, during his APS William James Fellow Award Address at the 2019 APS Annual Convention in Washington, D.C.

Beginning decades later in the 1940s, the work of Donald Olding Hebb, a mentor of Nadel’s at McGill University in Montreal, Canada, would help establish the existence of short- and long-term memory and of brain plasticity as the basis of learning and development. During this time, Hebb’s student Brenda Milner had the opportunity to investigate the unique case of one Henry Molaison, a man known at the time only as H.M.

The predominant understanding of memory in the 1950s and ‘60s was that immediate, short-term, and long-term memory all existed as a part of the same system. Molaison, after having a large chunk of his hippocampus removed in a surgery intended to limit his epileptic seizures, retained memories of his life before the surgery, and could maintain information in short-term memory for up to 20 seconds at a time. But he could no longer move material from short-term to long-term memory.

This seemed to suggest that the hippocampus serves as a catalyst of memory consolidation, supporting this transfer of information. Researchers could not, however, recreate Molaison’s amnesia by lesioning the same brain area in animal models, and the field was thrown into “complete chaos,” Nadel said.

Questions about the hippocampus’ purpose would remain at the forefront of memory science for over a decade until 1971, when psychological scientist and APS Fellow John O’Keefe (University College London, United Kingdom) made a Nobel Prize-worthy discovery: The hippocampus was home to setting-sensitive neurons now known as “place cells.” The firing of these cells supports the creation of cognitive maps.

“Cognitive maps predict what you might expect to find around the corner, so to speak,” explained Nadel, who would go on to collaborate with O’Keefe in writing the foundational 1978 book on the topic, The Hippocampus as a Cognitive Map (O’Keefe & Nadel, 1978).

The book was largely interpreted as telling a spatial story about the hippocampus, Nadel continued, but that wasn’t quite the whole picture.

“What people didn’t exactly cotton onto is that we were really talking about memory the entire time,” he explained.

The hippocampus’s place cells form the core of a context-dependent memory system — and there are multiple memory systems spread throughout the brain.

“There’s no such thing as the memory area; there are memory areas, each one of which is responsible for a different form of information,” Nadel said.

These systems vary in content as well as duration. Fortunately for those still waiting for the hippocampus to come online, they have distinct developmental trajectories as well.

A Land Before Hippocampi

No matter how you measure it, virtually no one reports instances of episodic memory from before the age of 2.

From a neurobiological perspective, the late maturation of the hippocampus, and thus the inability to create cognitive maps of our early experiences, plays a significant role in infantile amnesia, Nadel said.

Although species such as deer, antelope, and guinea pigs produce young that are capable of basic functions such as walking, swimming, and finding their own food shortly after birth, most animals are not ready to go right away, Nadel explained. For most species, the hippocampus has a postnatal maturation story. In humans, for instance, the neurons and synapses that make up this seahorse-shaped structure continue to form until a child is 18 to 24 months old, with adult function emerging between 10 and 12 years of age.

In rat pups, on the other hand, hippocampal development occurs in just 18 to 26 days. To an outside observer, it’s an all-or-nothing process. On one day, these pups show no interest at all when placed amid a field of novel objects, and the next they’re scurrying about with curiosity.

“There’s a switch, and then this system is going with respect to exploration,” Nadel said.

A similar switch seems to occur in the human brain as well. In a maze task designed to determine if individuals know where they are in space, Peter Anthony Mangan (Northern Arizona University) and Nadel observed 1- and 2-year-old children as they attempted to locate a toy hidden amid a circle of identical plates.

After being shown which plate hid the toy, 2-year-olds were able to locate it successfully in the place-based learning condition, in which they were required to start the trial from a randomly chosen point in the room. One-year-olds could complete the task only in the response-based learning condition, where they started at the center of the circle of plates and always found the reward under a plate 45 degrees to their right.

Before you have a functioning hippocampus, Nadel explained, your brain is incapable of place-based learning, but it has other systems to rely on. Thus, although 1-year-olds were not capable of storing information about the plate’s location in space, they could be conditioned to check under a plate that was a certain direction and distance from them.

“The critical point that I want to emphasize is that because the hippocampus is linked to learning in context, everything you learn early in life is going to be context free. It’s not going to be ‘only do this in that context’ or ‘this works in that context.’ It’s going to be only ‘do this or do that, everywhere,’” Nadel said.

Late maturation in various brain regions, including the hippocampus, also renders developing brains susceptible to stress, laying the groundwork for behavioral patterns with the potential to remain with us later in life, he continued.

Individuals raised in stressful situations and circumstances are often said to have to “grow up quickly.” In the case of hippocampal development, this appears to actually be the case, said Nadel.

Stressing rat pups, whether by shaking them in a box or isolating them from their mothers, has been found to move the onset of exploration, an indicator of hippocampal development, up to several days forward. But while stressed pups may be better equipped to take on the world one-on-one in the short term, this shift in maturation can cause problems down the road.

“Many things are developing simultaneously, and the synchrony and timing of that system is important,” Nadel explained. “If you pull something out of that structure and mistime it, that’s not necessarily a good thing.”

Under ideal circumstances, rats begin life with brains high in plasticity and then develop inhibitory responses that reduce that plasticity as they age. A rat hippocampus that was forced to mature early as a result of exposure to stress does not undergo the same reduction in plasticity, however, Nadel said, and this difference in development is reflected in its behavior as well.

In a task similar to the plate study described above, Nadel and colleagues found that at 6 months old, four out of five rats that were not exposed to early stress were able to successfully navigate a T-shaped maze as it was flipped to different orientations between trials. These rats employed a place-based strategy drawing on the hippocampus, Nadel explained, and learned that they needed to go to a particular place in the T — which could be on either the right or the left depending on how the maze was turned — to receive a reward.

Only two out of five rats that were exposed to stress early in life demonstrated an ability for place-based learning, however. The majority relied instead on a response-based strategy originating outside the hippocampus, causing them to associate actions such as taking a right turn with receiving a reward, even when the maze was oriented so that there was nothing there.

“Early stress, according to all these measures, is doing something with negative consequences for the long-term functioning of the hippocampus,” Nadel said.

This period of developmental sensitivity also makes the hippocampus particularly vulnerable to environmental toxins and chromosomal abnormalities, he continued.

For example, the brains of people with Down syndrome, who are born with an extra chromosome, are known to mature later and to grow to a smaller size. Their hippocampi are significantly smaller than average, even when you correct for differences in brain size, Nadel said.

This reduction in hippocampal size is reflected in these individuals’ inability to engage in place-based learning as well: Nadel and Mangan found that toddlers with Down syndrome are often unable to complete the place-based plate task at 3 or 4 years old, but they can locate the toy in the response-based version of the task. People with fetal alcohol syndrome and those living with the effects of lead exposure can experience similar deficits in hippocampal functioning, he added.

In the first few years of life before the hippocampus has begun to develop, our brains do a lot of learning in other systems, a significant portion of which will later be shrouded in infantile amnesia, Nadel said.

Individuals who suffer from arachnophobia, for example, often report having no idea why they’re so afraid of spiders. In some cases, it’s possible that decontextualized memories formed before the hippocampus is prepared to rein in the fearful impulses of the amygdala could form the basis of this and other seemingly inexplicable phobias, he explained.

“These fears that you acquire early in life, because they’re decontextualized, are going to generalize very broadly,” Nadel said.

Further research still needs to be done, but it could be that a similar process occurs during our adult lives as well, Nadel speculated. Particularly stressful or threatening experiences could cause the hippocampus to tap out in favor of the amygdala, enabling the creation of decontextualized fear memories that may be manifest as anxiety or posttraumatic stress disorder.

“Under high stress, [an adult’s] learning may be just like that of an infant,” Nadel said.

Every time you reactivate a memory, there’s the potential for it to change, and recontextualizing these fear memories in a clinical setting can help alleviate these conditions. The big question, Nadel said, is how to get the effects of this kind of treatment to stick in the long term.

On a neurological level, the plasticity of our brains, and thus our ability to reconsolidate these fear memories as adults, comes down to the balance of neurotransmitters in our brains, he explained. Manipulating this balance has already been shown to reopen the critical learning period for functions such as vision, and it may be possible in other areas, as well.

“Memory is way more plastic and dynamic than the field has ever admitted to,” Nadel concluded. “Once we admit that, all bets are off.” — Kim Armstrong

Mangan, P., and Nadel, L. (1992 July). Spatial memory development and development of the hippocampal formation in Down syndrome. Paper presented at the 25th International Congress of Psychology, Brussels

Wilson, L.A. (1993). The effects of early experience on the hippocampus (Unpublished doctoral dissertation). The University of Arizona, Tucson.