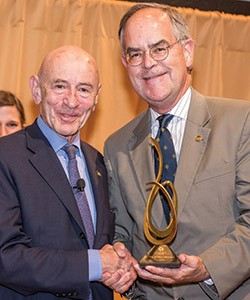 APS Past President Walter Mischel and two other psychological researchers were among the 2015 Golden Goose Award winners honored last month at a gala ceremony at the Library of Congress in Washington, DC. The award is given annually to highlight federally funded studies that have led to major scientific discoveries and benefits to society.

Mischel, an APS William James Fellow, along with his colleagues, APS Fellow Yuichi Shoda (University of Washington) and Philip Peake (Smith College), comprised the first group to be selected for this year’s awards

in recognition of their extensive contributions to the understanding of the lifelong benefits of self-regulation, and how it varies as a function of seemingly simple variations in the social environment. Mischel’s classic federally funded studies on children’s self-control, using a task known popularly as the marshmallow test, are among the most famous and impactful experiments in psychological science. Shoda and Peake, who both worked with Mischel as graduate students, built on his work by tracing links between self-control in early childhood and a variety of life outcomes. Much of that work is captured in Mischel’s recent book, The Marshmallow Test: Mastering Self-Control, in which he explains how self-control can be mastered.

In accepting the award, Mischel bestowed a message on young scientists: “Be curious and courageous; have a burning goal.”

The September 17 awards event drew a huge audience of lawmakers, scientists, science policy advocates, and policymakers. Serving as master of ceremonies was Frank Sesno, Director of the School of Media and Public Affairs at The George Washington University and former anchor at CNN.

The other 2015 awardees included Joel E. Cohen, a mathematical population biologist, and Christopher Small, a geophysicist, who were honored for their groundbreaking work on “hypsographic demography” — the study of how human populations are distributed by altitude and how that pattern exposes people to varied geophysical and biological hazards. Neurophysiologists Torsten Wiesel and the late David H. Hubel also were honored for their pioneering work on neuroplasticity.

The Golden Goose Awards were inspired by US Representative Jim Cooper (D-TN), who proposed the recognition as a way to increase understanding of the nature of science. The awards have received bipartisan support from supporters of science on Capitol Hill. Other congressional supporters include Representatives Suzanne Bonamici (D-OR), Charlie Dent (R-PA), Robert Dold (R-IL), Donna Edwards (D-MD), and Randy Hultgren (R-IL), and Senator Chris Coons (D-DE).

The Golden Goose Award is meant as an antidote to such attacks on science as the Golden Fleece Award, created by the late US Senator William Proxmire (D-WI) to highlight what he considered wasteful federal spending. The Golden Fleece Awards often targeted studies just on the basis of titles or abstracts. Proxmire’s “awards” have been criticized for having a detrimental effect on science by discouraging researchers from pursuing potentially fruitful but unproven ideas that can lead to major breakthroughs.

Several organizations, including the American Association for the Advancement of Science, the Association of American Universities, and the Progressive Policy Institute, took up Cooper’s idea and began issuing the awards annually in 2012. APS is among the lead sponsors of the award.

Past recipients of the award have included Nobel laureates and pioneers in such fields such as microbiology, marine geology, economics, computer science, mathematics, and biochemistry.