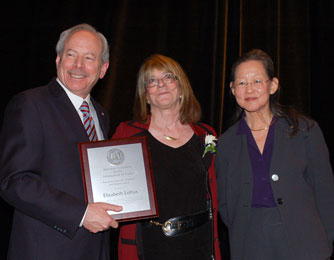 APS Past President Elizabeth Loftus is this year’s recipient of the Scientific Freedom and Responsibility Award from the American Association for the Advancement of Science (AAAS) for her pioneering research on human memory, which has had a profound impact on the administration of justice in the United States and abroad. The AAAS Award, established in 1980, honors scientists, engineers, and their organizations “whose exemplary actions, sometimes taken at significant personal cost, have served to foster scientific freedom and responsibility.”

“I feel grateful and privileged,” said Loftus, “that the research I have done on memory in the past three decades has been honored for its contributions to science and human welfare.”

Loftus’s research on how memories can be influenced and changed by facts, ideas, suggestions, and other post-event information is widely recognized and applied by the legal field. “I was merely a scientist interested in the fallibility and malleability of memory, a subject that turned out to be central to the ‘repressed memory’ moral panic that swept this nation in the 1980s and 1990s,” she said. Loftus, a Distinguished Professor at the University of California, Irvine says that psychological scientists are close to figuring out how to contaminate someone’s memory. “Periodically,” said Loftus, “I must say that I worry about it getting in the wrong hands and being used for nefarious purposes. It might help if we continually keep in mind that memory, like liberty, is a fragile thing.”

The AAAS award is just one of many prestigious honors Loftus has received. In addition to winning two APS lifetime achievement awards – the William James Fellow Award in 2001 and the James McKeen Cattell Fellow Award in 1997 – she has also received the Distinguished Contributions to Forensic Psychology Award, the Distinguished Scientific Award for the Applications of Psychology, six Honorary Doctorates and numerous other national and international awards. She is also a member of the National Academy of Sciences and the American Academy of Arts and Sciences.