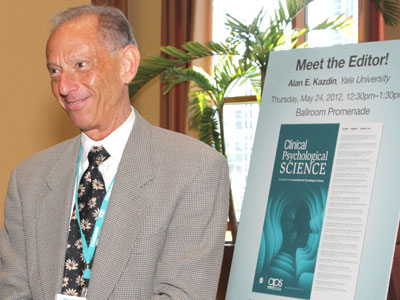 Clinical Psychological Science Founding Editor Alan E. Kazdin waits to greet a crowd of attendees who are excited about the new journal.

His name may not appear in bold face in a celebrity magazine, but for students and seasoned professionals alike, Alan E. Kazdin inspired some of the same awestruck reactions as the arrival of a rock star. Cameras appeared. Fans gathered.

But Kazdin is a genial, accessible, modest and intellectual rock star who happens to be the John M. Musser Professor of Psychology and Child Psychiatry at Yale University, Director of the Yale Parenting Center, author of a number of seminal books, and editor of the new Association for Psychological Science journal Clinical Psychological Science.

Kazdin came to the 24th APS Annual Convention to launch the new journal and to engage future readers as well as potential contributors. Rigorous, interdisciplinary clinical research has not had a vehicle for dissemination. And that is where the new journal, Clinical Psychological Science, fits in.

“It really is a new field,” Kazdin explained between photo shoots with his fans. “No other journal starts with that claim. These issues can be informed by cellular biology and microbiology, novel meta-analyses, epigenetics, public health. There are no boundaries in what we plan to do.”

Kazdin has spent much of his career studying children and parenting. But today, he says, when students ask to work with him by referring to all of his past greatest hits, he says, “That Alan Kazdin isn’t here anymore.” The new Alan Kazdin is looking at new models to help change clinical psychology. And after an hour of talking to people, joking, offering some speed mentoring, and — of course — getting his picture taken, the new Alan Kazdin had to leave Chicago and catch his flight home.