From the beginning to the very end of the 24th Annual APS Convention in Chicago, APSSC events provided opportunity after opportunity for burgeoning psychological scientists to make connections that will shape their career for the better.
Thursday night, APSSC Past-President Jessica Wong, of the University of Chicago, hosted the Student Social at Lizzie McNeill’s Irish Pub. A record number of student affiliates enjoyed drinks and hors d’oeuvres on a warm, Chicago evening. Attendees wore stickers listing their research area, giving them a chance to connect with other students who share their interests and chat about their research as boats floated by on the Chicago River.  The party kept rolling until midnight and ultimately set the stage for an engaging and productive convention.
Friday’s programming began with the Naked Truth Panels, which focus on different aspects of the graduate school experience. “The Naked Truth I: Getting into Graduate School,” chaired by outgoing Undergraduate Advocate Kris Gunawan, University of Nevada, Las Vegas, helped reduce attendee’s apprehension about the application process for graduate school.  The panelists separated the discussion into three sections: what to know before applying to graduate school, what to do during the application process, and what to expect in a graduate school interview. They provided a wealth of advice, including the suggestion that prospective graduate students should attend poster sessions and workshops to network and find potential graduate advisors. They also warned students to stay professional during a graduate school interview, but still be authentic.
“The Naked Truth II: Surviving Graduate School,” chaired by outgoing Graduate Advocate Sean Hughes, National University of Ireland, Maynooth, imparted helpful advice on balancing the priorities of graduate school with having a life beyond it. Panelists talked about a variety of issues that face graduate students, including establishing a personal research program, maintaining a work-life balance, sustaining professional relationships with students and advisors, and developing writing skills. Even though graduate student life can seem overwhelming and arduous at times, the panelists kept their observations positive and upbeat, pointing out that there were positive aspects of graduate school too.
“The Naked Truth III: Navigating the Job Market After Graduate School” covered how to steer a course through the academic marketplace after graduation. Led by outgoing Past-President Peter M. Vernig of Suffolk University, panelists kept the tone of the discussion informal and conversational despite the harsh realities of the current job market. Each panelist discussed his or her own journey to their current positions  and focused on the things they wished they would have known beforehand.
Friday afternoon, Past-President Jessica Wong chaired the “Science Behind Excellence in Teaching and Learning” symposium.  Jeffrey D. Karpicke, Purdue University, explained how multiple retrieval attempts facilitate long-term retention, and Jeremy Houska, Concordia University Chicago, applied this idea to attitude changes in the classroom. Beth M. Schwartz, Randolph College, presented data on class participation as a function of gender of the instructor and students. Tracy Zinn, James Madison University, discussed the characteristics of students who feel entitled to an A, correlations between entitlement and metacognition, and how to handle entitled students. David Daniel, from James Madison University, rounded out the panel by discussing how to assess the effectiveness of teaching techniques, including techniques that most teachers think work well, but actually do not.
The last event on Friday, a forum on “How to Get Published,” was chaired by outgoing Student Notebook editor, Nicholas Eaton, University of Minnesota. The panel consisted of editors from prestigious journals, including Margaret Clark, Yale University; Barbara A. Spellman, University of Virginia; Thomas F. Oltmanns, Washington University in St. Louis; and Simine Vazire, Washington University in St. Louis. In a wide-ranging discussion, the panelists advised students on drafting successful manuscripts, selecting appropriate publications, and responding effectively to reviewers. The panelists made a variety of suggestions to student authors, such as including the names of potential reviewers in cover letters. Another tip was to actively seek out journal-reviewing opportunities by requesting to co-review manuscripts with their advisors to learn more about behind-the-scenes factors that can influence an editorial decision.
First on the agenda for Saturday morning was the Campus Representatives meeting. Outgoing Membership and Volunteers Officer Michelle Patriquin invited all campus representatives to discuss topics such as Rally Week and other concerns they might have. Campus reps from around the world talked about the possibility of extending Rally Week into two weeks and creating a set time frame for Rally Week during the fall and spring semesters to give campus reps more advance notice. A European representative also suggested creating welcome packets translated into different languages for prospective international representatives. 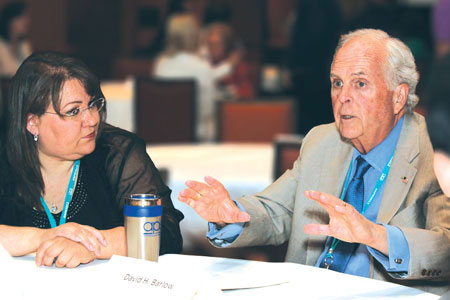 David H. Barlow shares his wisdom with graduate students at the Champions of Psychological Science event.

Later on Saturday morning, attendees were treated to award addresses given by RISE Award and Student Research Award recipients. The RISE Award winners, whose research focused on socially and economically underrepresented populations, discussed topics ranging from spatial abilities in instructional media to stereotypes associated with being single. The year’s recipients were Tegan B. Garland, Arizona State University, Bridget R. Jeter, East Tennessee State University; Ethan H. Mereish, Boston College; and Gal Slonim, University of Haifa, Israel. The Student Research Awards recognize outstanding student research, and the 2012 recipients presented an impressive body of work on topics such as opting into healthcare procedures or the connections between emotions. This year’s recipients were Joëlle Jobin, Concordia University, Canada; Trishna Narula, Emory University; Madeleine L. Werhane, University of Puget Sound; and Roger C. McIntosh, Florida Atlantic University.
The final event on the APSSC convention calendar was one of the most exciting: the Champions of Psychological Science event. Students had a chance to meet informally with distinguished investigators to discuss research, graduate school, and tips for being a successful psychological scientist. This year’s event was the largest ever, with eleven champions: David H. Barlow, Boston University; Roy F. Baumeister, Florida State University; Margaret Beale Spencer, University of Chicago; Richard G. Heimberg, Temple University; James S. Jackson, University of Michigan; APS President Douglas L. Medin, Northwestern University; Brenda Milner, McGill University, Canada; Henry L. Roediger, III, Washington University in St. Louis; Barry Schwartz, Swarthmore College; Joseph E. Steinmetz, The Ohio State University; and social psychologist and writer Carol A. Tavris. Students lined up all the way down the hall to get in, and many of the discussions lasted well beyond the event.
Thanks to the panelist and chairs who volunteered their time and energy, this year’s APSSC events were a hit, and the APSSC Executive Board is looking forward to hosting more student affiliates next year in Washington, DC. 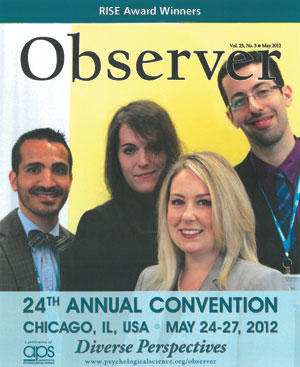 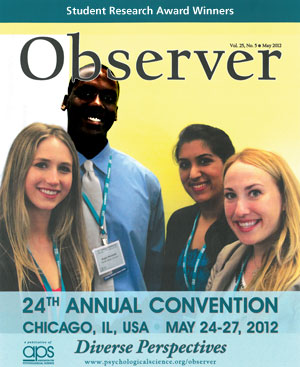