Not many psychological scientists can list a dictionary on their CV. As Chair of the Usage Panel of the American Heritage Dictionary, APS Fellow and word guru, Steven Pinker leads a group of 200 language experts (including novelists, journalists, and even humorists) who weigh in on the appropriate use and construction for words used in American English. But instead of grammar tips, the Harvard psychological scientist has six articles to recommend for researchers who want to read up on the latest in language science. 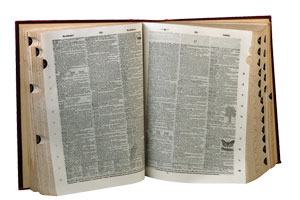 When is four far more than three? Children’s generalization of newly-acquired number words

Psychological Science, 2010 by Yi Ting Huang, Elizabeth Spelke, and Jesse Snedeker
Children may have more than one system to represent numbers in their minds, explaining why learning “one,” “two” and “three” won’t necessarily get them to “four,” “five,” and “six.”

Perception, action and word meaning in the human brain: The case of action verbs

Annals of the New York Academy of Sciences, 2011 by Marina Bedny and Alfonso Caramazza
Understanding the meaning of action verbs — like “hopping”— doesn’t rely on the same neural circuitry involved in processing sensory-motor experiences, say the authors of this review.

Parallels and nonparallels between language and music

Music Perception, 2009 by Ray Jackendoff
Music and language may share some of their underlying cognitive mechanisms, but they also differ significantly in others.

Journal of Neurology, Neurosurgery, and Psychiatry, 2011 by Simon E. Fisher
The latest word on the famous FOXP2 gene, which has a unique sequence in humans, and which can cause a deficit in speech and language when it is mutated.

Rationales for indirect speech: The theory of the strategic speaker

Psychological Review, 2010 by James J. Lee and Steven Pinker
Innuendo, doublespeak, and other forms of shilly-shallying drive people nuts. But dancing around the point can sometimes be more useful than blurting out what you mean, according to the strategic speaker theory.