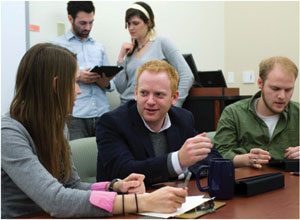 The White House has announced that Jeffrey D. Karpicke, James V. Bradley Associate Professor at Purdue University, is the recipient of a Presidential Early Career Award for Scientists and Engineers. The honor, which is the highest bestowed on early-career scientists and engineers by the United States government, was granted to 102 researchers.

Karpicke’s research interests include human learning and memory, cognitive science and education, learning and cognitive strategies in children, and educational technology. In a 2012 review published in the APS journal Current Directions in Psychological Science, Karpicke stressed the importance of retrieval-based learning, an approach which holds that retrieval of information not only enforces it through repetition but also helps develop long-term knowledge.

Karpicke, a 2011 APS Rising Star, was the only person to be nominated for the award by two groups: the National Science Foundation and the Department of Education. Karpicke heads the Cognition and Learning Lab at Purdue and hopes to integrate his research with real-world tools to solve problems in education, encouraging his students to “solve new problems in creative ways.”