The distinguished panelists gathered for “The Future of Clinical Psychology,” a special event at the APS 22nd Annual Convention, agreed on one thing: People in the United States can be getting better mental health care. Everything else proved fair game for lively debate.

The event grew out of controversy sparked by a Psychological Science in the Public Interest (PSPI) report that proposed a new system of accrediting clinical psychology doctoral training programs. Currently, such programs are accredited by the American Psychological Association. The authors of the PSPI report contend that the existing accreditation system fails to ensure that clinical training programs produce practitioners who are  versed in empirically validated treatments. The newly proposed system, called the Psychological Clinical Science Accreditation System (PCSAS), aims to create a new generation of therapists grounded in scientific thinking. 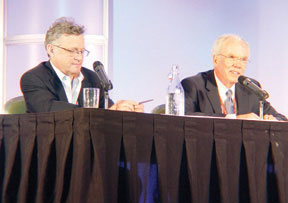 “One of the goals of creating the new accreditation system is … to really try and identify a particular approach to training that’s at the highest possible level of quality — that’s emphasizing research training,” said panelist and PCSAS Executive Director Richard McFall, Indiana University, a coauthor of the PSPI report. “Our accreditation system is really aimed at advancing the science of clinical psychology with an eye toward improving the health care and well-being of our citizens.”

“Our view is that there are far more productive avenues to explore in addressing the problem than opening the Pandora’s box of yet another accreditation system,” said Breckler, who heads the science staff at APA.

One of these avenues is getting the work of clinical researchers into the hands of therapists in a form they can read, understand, and apply to their practice. Medicine has mastered this process. So has psychiatry. Yet psychology has not, said Breckler, in part because there’s “a poor appreciation for the life of a practicing psychologist on the front line.”

The panel, which was moderated by Joe Palca of National Public Radio, included two related experts who weighed in on the matter: APS Fellow Antonette Zeiss of the U.S. Department of Veteran Affairs, and APS Fellow Bruce Cuthbert of the National Institute of Mental Health. 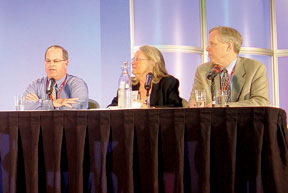 In the ideal world, said Zeiss, all VA therapists would be trained as both clinicians and researchers. But the simple truth is that many licensed professionals aren’t familiar with all the latest evidence-based treatments, so the VA has developing its own, supplemental training system.

“I would love it if more people came to us already having had experience being trained to fully deliver these therapies, but in the meantime we’re stepping up to do what we can,” she said.

The bottom line, according to Zeiss, is that all possible therapies have to be available to patients, so they can work with clinicians to find the one best suited to their problem.

Cuthbert suggested that doctoral-trained clinical psychologists may be headed toward a day when they do less therapy and more oversight of nurses, masters-level practitioners, and others who can deliver care in a large number of cases.

“It could be that one of the roles for the clinical psychologist of the future is not so much as an hourly wage person delivering one-on-one therapy, but rather having the skills to organize, coordinate, and direct teams of professionals,” he said.

Toward the end of the discussion, Breckler argued that the new accreditation system doesn’t address the current shortage of therapists, because it only trains the trainers. McFall contended that the point of the system is more general — to “lead the way” into a new, highly scientific era of clinical psychology.