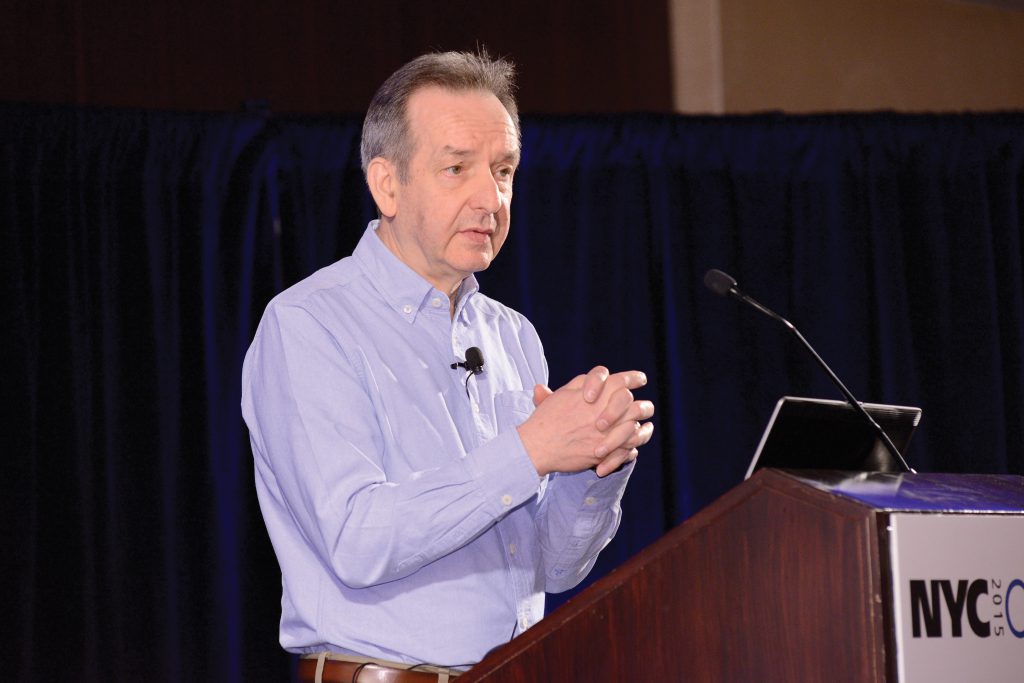 Never before or since the Scottish Mental Surveys (SMS) of 1932 and 1947 has the cognitive capacity of almost an entire birth-year segment of a country’s population been measured. The results of those surveys have led to extensive and fruitful lines of research, including how intelligence test scores relate to longevity and how cognitive ability changes from childhood to old age. APS James McKeen Cattell Fellow Ian J. Deary (University of Edinburgh, Scotland), one of the founders of the field of cognitive epidemiology and a contributor of seminal work in that area, has followed up with many of the original study participants to explore lifetime changes in brain structure and behavior.

“The … important thing is not just the cognitive stability, though that is interesting, because these studies are the longest follow-up studies of intelligence; the thing that we’re after is the determinants of instability,” Deary explained during his award address at the 2015 APS Annual Convention. “What we’re interested in is how much people change from childhood to older age. So we’ve made that the foundation of our cognitive aging studies.”

One major area of interest for the researchers was the effect of differences in the SMS participants’ IQs at age 11 on their social and academic progression in life. Deary and colleagues searched the database of the Scottish Midspan Collaborative Studies (MCSs), pioneered by Victor Hawthorne in the 1960s to track large-scale public health research, and found 243 men who took part in both the 1932 SMS and one of the MCSs conducted from 1970–1973. By comparing the IQ of these men at age 11 with their positions in middle age, the psychological scientists found an increasing correlation across the lifespan. Thus, the men’s mental ability as children had a lower association with the class of their first jobs (.12) than with their social position in midlife (.43).

“This is sometimes called the ‘gravitational effect’ — that people who are bright tend eventually to get to their cognitive level,” Deary explained.

However, IQ at age 11 was not the only contributor to later life success, he continued: “If you look at the contributors to midlife social position, mental ability contributes; so does education; so does the class of the first job; and so does the father’s social class. So the story here is not just meritocracy or social inertia; it’s a bit of both … social background as well as ability as well as education all contribute.”

Deary and his colleagues also went to great lengths to trace the vital status of some of the original SMS participants in old age. They broke down the data from the original 1932 and 1947 SMS into more manageable geographical cohorts (e.g., the 1932 Aberdeen Cohort, composed of 2,792 children) and spent 3 years tracing as many of the original participants (both alive and dead) as they could. After locating 79.9% of them by 1997 (the participants were then approximately 76 years old), the researchers linked the data with death certificates. One of the starkest contrasts between those with low versus high MHT No. 12 scores, Deary found, was that a 15-point disadvantage in children’s mental ability at age 11 resulted in those children being only 79% as likely to be alive 65 years later as their counterparts with higher IQs.

“I’m going to put it even more simply,” he said. “On average, a girl with a 30-point disadvantage in IQ on this 45-minute test at age 11 was half as likely to be alive all those years later.”

Further research into health outcomes correlated with MHT No. 12 scores has uncovered specific diseases that may be linked with IQ at age 11. After searching dementia databases in Scotland, for example, Deary and colleagues found that vascular dementia, but not Alzheimer’s disease, was associated with a lower mental ability at age 11.

The psychological scientists also examined whether specific factors, both physical and mental, were instrumental for good cognitive aging in the SMS participants, and whether those factors were related to participants’ childhood IQs. The factors they studied included bilingualism, education, occupational complexity, social support, loneliness (or lack thereof), intellect, and sociointellectual activity.

“This [is] why it’s special having these age 11 scores, [because with that information] we can also ask this: For all of these factors that we gather in older age, are any of them related to having a good MHT score at age 11?” The answer, according to Deary, is “some are” — notably, bilingualism, education, occupational complexity, intellect, and sociointellectual activity.

Furthermore, some factors that spur healthy cognition in older age are not simply related to having a good MHT No. 12 score at age 11; in fact, the IQ score at age 11 sometimes nullifies the factor–cognition association in older age. This is an example of confounding or reverse causation, something these studies are well placed to test and discover.

Physical biomarkers such as high levels of vitamin B12, high folic acid, lower homocysteine (a nonprotein amino acid), high levels of “good cholesterol,” lower inflammation, not having contracted the cytomegalovirus, longer telomere length, and good retinal vessel topography (a measure of the brain’s blood cells) also are related to SMS participants’ MHT No. 12 scores at age 11. For some of these factors, the IQ score at age 11 acts as a confounder of the factor–older age cognition association.

The cytomegalovirus infection, or lack thereof, particularly interested Deary. Two-thirds of the birth cohort from Lothian had this virus, which is associated with slightly lower mental ability in children and also with poverty and overcrowding. After reexamining the Lothian birth cohort in older age, the researchers found that the correlation of low mental ability with the cytomegalovirus did not continue through life — but there was a catch.

“Those people who were infected, we measured their antibody titration, and those people who were devoting more of their immune system to dealing with the cytomegalovirus as they got older had lower cognition,” Deary added. “So there’s a rather detailed story going on there.”

Throughout his address, the cognitive epidemiologist (who is trained in both psychology and medicine-psychiatry) stressed the importance of his team’s diverse scientific backgrounds and modern technology for his studies — for example, he and his team can make 3-D prints of SMS participants’ brains, and they can measure cortical thickness. They also are running full genome sequences on and are making stem cells from some of the participants in the 1921 and 1936 Lothian birth cohorts. Deary hopes these studies will add to the ever-growing databank of information about the SMS and provide additional fodder for future psychological scientists.

A new private psychology student here who despite havng done years of daily exptensive unpaid online research has only jsut started a formal course in psychology and was made to watch this video and read this page.Very interesting truly. I do hope it’s beneficial to my future.
🙂