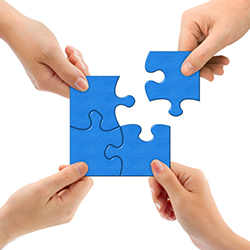 Traditionally, researchers in different fields have banded together, leading to ever-evolving but separate lines of work. However, there is now an increasing awareness that much can be learned by combining knowledge across a wide range of psychological and biological disciplines. This new focus on integrative work is especially evident in the growing body of research showing that our brains, biology, and environments are not independent — each influences, and is influenced by, the others.

This kind of integrative research is highlighted in a recent article published in Current Directions in Psychological Science, whose authors Annie Bernier, Célia Matte-Gagné, and Andrée-Anne Bouvette-Turcot (University of Montreal) have reached across cognitive, biological, and social-emotional fields to investigate the connections between relational experiences and neural maturation in early life.

Using a variety of methods and measures, the researchers examined direct and indirect associations among children’s quality of sleep, their executive functioning (EF), and their caregiving relationships. Their findings showed that secure attachments between parents and children lead to better sleep, which in turn leads to better EF (including the regulation of behavior and emotions).

From a broader perspective, these results indicate that if children can establish secure attachments with their caregivers, these relationships may help their biological development to unfold naturally. Good-quality sleep may serve the same function, as the researchers found that infants with more mature sleep patterns exhibited better EF performance 4 years later — even when controlling for prior EF and general cognition.

The findings also point to several factors that may protect children from genetic vulnerabilities or the effects of less than ideal environments. For instance, mature sleep patterns appear to buffer children against the effects of low maternal sensitivity, and high-quality parenting improves the impulse control of children in low-socioeconomic-status households.

The authors stress that the next step will involve moving toward longitudinal designs and observational measures with genotyping, brain imaging, and intervention studies, underscoring the need for future work and further integration in this and all areas of psychology.

This work by Bernier and colleagues is just one example of integrative research that has added to our understanding of psychological phenomena. The increasing interest in bringing together varied fields of research has led APS, in conjunction with an international network of scientists and scientific organizations, to spearhead a new international convention highlighting and encouraging integrative psychological research. The inaugural International Convention of Psychological Science (ICPS), which will be held March 12–14, 2015, in Amsterdam, the Netherlands, is a first-of-its-kind international conference. ICPS will feature a wide range of integrative science symposia, skill building workshops, and poster presentations.