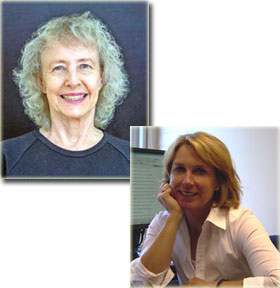 Wendy Wood, of University of Southern California, and Alice Eagly, of Northwestern University, chairs of the symposium on the cultural and biological evolution of gender, have been turning heads for the last couple years by casting doubt on the dominant discourse in evolutionary psychology of gender.  By examining the ways men and women choose mates, they’ve shown that the old paradigm of choosy females and willing males doesn’t actually hold up – even though it seems to work in animal populations.

In today’s panel, Wood and Eagly, along with Linnda Caporael, of Rensselaer Polytechnic Institute, and Karen Kramer, of Harvard University, outlined the problems with evolutionary psychology and began to describe a new framework for understanding the evolution of gender.  Gender isn’t a product of genes, each of the presenters reminded us, but rather a complex aggregation of cultural and biological factors.

In the prevailing understanding, genes reign supreme, while the rest of a person’s personality comes along as a result.  Caporael provided the audience with a glimpse of an alternate understanding of evolution: repeated assembly.  In Caporael’s model, genes come together with culture and environment to produce an individual.  With each generation, these factors continue to come together, and the influence of the gene is just as important as the contributions of culture and society.

Eagly used this model to explain the social construction of gender and the way it plays out in individual psychology: As people repeatedly perceive gender roles, they become essentialized – the roles of men and women become so well-defined and apparently natural that they are widely believed to be a part of our own evolution.  Through the behavioral reinforcement of appropriately gendered behavior, the introspective construction of individual gender, and the actions of hormones, the roles of men and women become repeatedly assembled based on culturally available gender norms.

Observer > 2011 > July/August > Gender: A Product of Cultural and Biological Evolution