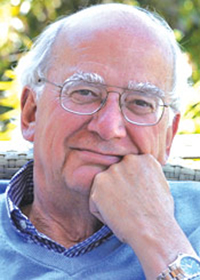 APS Past President Michael S. Gazzaniga has been named a 2015 William James Fellow Award recipient for lifetime contributions to basic psychological science for his innovative experiments with split-brain patients, which revolutionized the understanding of human consciousness by showing that the brain’s two cerebral hemispheres undertake distinct cognitive functions. Known as the father of cognitive science for his groundbreaking contributions to the field, Gazzaniga will give his award address at the 2015 APS Annual Convention in New York City, to be held May 21–24.

To ease severe symptoms in patients with epilepsy, surgeons cut the bundle of nerves connecting the right and left hemispheres of the brain. Gazzaniga’s work with these split-brain patients led to the major discovery that the two hemispheres of the brain were more specialized than previously believed. While the left side of the brain is usually the center for speech and language, the right side tends to handle visual-spatial processing and facial recognition processes.

These breakthroughs led to Gazzaniga’s influential theory of the left-hemisphere interpreter system, which explains how people have a unified sense of self despite the lateralized nature of the brain. The brain’s left hemisphere includes a specialized “interpreter” region that triages and organizes our experiences and sensations into usable narratives that allow us to process and interpret incoming information from the world around us. This discovery has had broad implications for diverse academic topics ranging from philosophy and bioethics to the debate surrounding the role of free will within the criminal justice system.

Gazzaniga also has developed new, quantitative ways of using both functional and structural brain imaging methods to map functional specialization within the brain. His extensive studies of patients with focal brain damage have demonstrated the scope and limits of information processing outside of conscious awareness following brain lesions.

Currently the director of the SAGE Center for the Study of Mind at the University of California, Santa Barbara, Gazzaniga has been a prominent advocate for science in national policy, serving on the President’s Council on Bioethics, as a member of the National Academy of Sciences and the Institute of Medicine, and as the founding director of the MacArthur Foundation Law and Neuroscience Project.

He was founding editor-in-chief of one of the leading journals in the field, the Journal of Cognitive Neuroscience, and his numerous books on psychological science and the brain have received national praise for making cutting-edge research accessible to the public. His most recent book, published in February, is Tales From Both Sides of the Brain: A Life in Neuroscience. Gazzaniga will be signing copies of this book at the APS convention