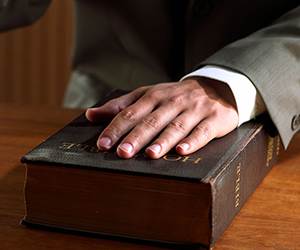 An innovative research-replication initiative has generated results that have important implications for eyewitness memory. The project confirms earlier findings that asking witnesses to provide a verbal description of a suspect can impair their ability to select that suspect from a lineup — the so-called “verbal overshadowing” effect. This Registered Replication Report (RRR) is the first completed project from an initiative launched in 2013 by the journal Perspectives on Psychological Science.

In the original study, published in 1990 by APS Fellow Jonathan W. Schooler and Tonya Y. Engstler-Schooler, participants viewed a video of a simulated bank robbery and were then asked to write a description of the robber or to generate a list of US states and their capitals. The results showed that participants who described the robber were less likely to pick him out of a subsequent lineup than were those who listed states and capitals.

“Finding a smaller effect in a replication does not invalidate the original research,” says APS Fellow Daniel J. Simons of the University of Illinois at Urbana–Champaign, editor of this RRR. “We should expect smaller effects in this sort of replication, in part because of the incentives and biases of the publication system itself. One conclusion we can draw from this RRR is that earlier studies of the verbal overshadowing effect used sample sizes that were too small to detect the effect reliably or to measure it precisely.”