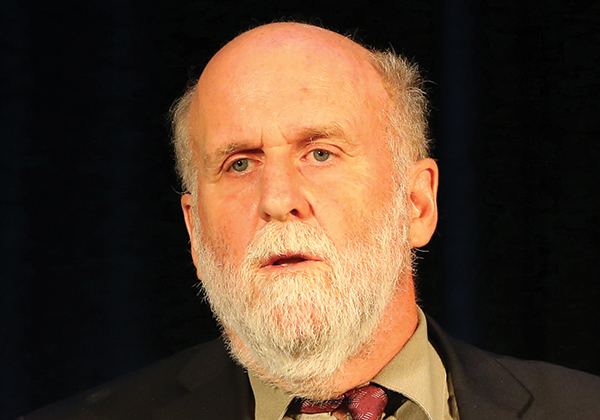 Psychological scientists who study memory have long known that the human brain generates imperfect reproductions of the past — we often combine unrelated events or misremember significant details. Such mistakes can result in banal blunders or more serious misunderstandings: Eyewitness memory, for example, is an area that has proven ripe for mistakes, with many witnesses unintentionally making false identifications with a high degree of confidence.

In keeping with this topic, APS William James Fellow Daniel L. Schacter (Harvard University) asks, “What are the functions served by a constructive rather than a rote/reproductive memory system?” During his award address at the 2017 APS Annual Convention in Boston, Schacter delved into the minutiae of memory, discussing studies that tested people’s recall abilities using everything from semantic association to fMRI.

Over the course of his career, the cognitive psychologist has attempted to investigate the reasons why the human brain stores information in this way: “Maybe one reason we have a constructive memory system is because it does a pretty good job about holding on to the general meaning and themes of experiences, and we typically don’t really need to remember all the details of every experience,” Schacter suggested.

To examine how false memories arise in a low-stakes memory situation, Schacter and colleagues used the Deese, Roediger, McDermott (DRM) procedure. They had individuals study words that have a similar theme (e.g. “candy,” “sour,” “sugar,” “bitter,” “taste”), then tested their memory for those words using a recall or recognition test. In the recognition test, researchers presented participants with either an unrelated word (e.g., “point”) or a “critical lure” — that is, a word that easily could have been on the list but was not (e.g., “sweet”).

Numerous studies have found that not only are people highly likely to believe the lure was on the list, they also have great confidence in that belief. Early work from Schacter’s lab indicated that older adults show higher levels of both phenomena.

“False recognition here seems to be based on memory for semantic information or relations, and older adults may retain this information and rely on it perhaps even more than younger adults,” Schacter suggested.

To take this line of inquiry a step further, Schacter and collaborators at University College London wanted to examine the brain regions that might affect the connection between words and memories. In particular, they focused on the temporal pole (TP), which “has been called by many people for many reasons the semantic hub of the brain.”

Supporting this theory, Schacter noted, is the fact that damage to this brain area results in semantic dementia — a type of memory loss wherein individuals have difficulty processing word-related information but are capable of retaining other details.

Computational models of semantic cognition suggest that fMRI scans should show similar brain-activity patterns when similar words are given to a participant. Thus, Schacter and colleagues predicted, “the probability that a DRM list will generate a false memory should be directly related to the degree of neural overlap [between list items and the critical lure] in the TP.”

Schacter and his team gave participants in an fMRI scanner four sets of words and a lure; importantly, each set was associated with a different probability of a false memory
(i.e., some lures were more closely associated with their sets than were others). They posited that a high degree of neural overlap between a set and its lure would result in a high likelihood of false memory creation.

Indeed, that was the case: “No other brain region shows this relationship,” Schacter said.

These findings suggest that our memories are easily swayed by similarities — a phenomenon that may create problems when the consequences of misremembering are not as small as simply identifying the wrong word.

Schacter says we should not despair about the ways in which our memory operates, however. Citing a 2007 study he conducted with APS Fellow Donna Rose Addis (University of Auckland) and Alana T. Wong, Schacter suggested that remembering past events can be used to positively influence future decisions.

The researchers gave study participants in an fMRI scanner a cue word and asked them to either remember a past experience related to that word, imagine a novel future experience connected to that word, or carry out visuospatial- or semantic-processing control tasks that did not involve a past or future episode. They found that a core network of brain regions showed strikingly similar increases in neural activity when people remembered past events or imagined future events compared with when they performed the control tasks.

“Episodic memory, which is traditionally associated with recollection of past personal experience, plays a key role in imagining possible future scenarios,” Schacter said. “It does so by supporting what we call flexible retrieval and a recombination of elements of shared episodes to construct possible future episodes.”

The psychological scientist explained that this finding led him and Addis to theorize that our memory system could be trained to think about the future in a way that leads to positive choices — a process they call “episodic simulation.”

Such simulation could engender a beneficial outcome for people who have difficulties regulating their eating behavior, for example. Because people tend to devalue a reward the longer it takes for them to receive it, they are more likely to choose a smaller immediate reward (e.g., an unhealthy food) than wait for a larger delayed reward (e.g., a healthier lifestyle).

However, said Schacter, if a person can imagine concrete features of the big reward they are waiting for — such as how they will fit more comfortably into their clothes when they have lost weight — they can more easily make farsighted judgments.

Putting the Puzzle Pieces Together

To investigate further how and why elements of different events can be miscombined, Schacter also discussed another adaptive memory process called associative inference, which allows us to “combine related information in distinct episodes to make novel connections.” If we see two people walking the same dog on different days, for example, we can be reasonably certain that there is some relationship between the two people. This process can involve one of two key elements: integrative encoding, whereby the presentation of one combination activates the memory of the other combination, or flexible retrieval, whereby a test activates the recall of the link between the pairs.

Schacter and Harvard graduate student Alexis Carpenter wanted to isolate the mechanism of flexible retrieval to see whether it also contributes to memory errors. They theorized that while the process can support connection of related events, it also can cause confusion about the details of each case (e.g., people may recognize an important connection between events but miscombine smaller elements of each event).

In an experiment, Carpenter and Schacter showed participants two scenes: a man holding a toy (AB) and a boy holding the same toy (BC), each in a room of a house. Participants were told they’d be tested on whether the A and C elements were connected and would be asked about minor scene details (e.g., the color of a couch in the room).

During the second part of the experiment, individuals were tested on background scene details for half of the scenes, were then given associative inference tests about the connection between A and C, and finally were tested on background details in the other half of the scenes. While individuals were frequently able to correctly infer the relationship between A and C, they sometimes misidentified small details in each scene as belonging to the other scene or as belonging to both. The scientists posited that successful flexible retrieval might also increase susceptibility to false memories, but only when participants were questioned about details after they were tested on the main events.

“You should make more source memory confusions when you get the inference right than when you get it wrong, but only when the source test is given after the inference test, because that’s where flexible recombination is occurring,” Schacter explained. This may be because individuals sometimes merge details from the two scenes when they get the inference correct, thus ingraining the false memories as well as the accurate ones.

That, indeed, is what the scientists found: “You’re making more false memories when you get the inference right, but only when the source memory test comes right after you’ve done the flexible recombination,” he concluded.